I have just returned from the Rooftop of Queensland, having spent time toasting my toes around the campfire at the delightful Mount Moffatt. We camped in what is part of the Carnarvon National Park, up high on the Consuela plateau where the Maranoa River is born and we explored the ancient lands of the Bidjara People. 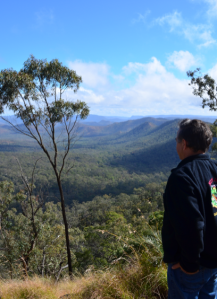 The Roof of Queensland

I have visited the Carnarvon National Park many times over the years but this was the first time I could sit with the wild birds and animals, amongst the towering cyprus pines and gums on the high plateau for more than a short time. It was glorious!

Our days were filled with exploring the ancient campsites and art galleries of the Bidjara mob, photographing and documenting stencils left on sandstone cave walls in ochres of red, yellow and black along with rock etchings of the burial sites where the tribal people of the plateau buried their dead in a rich social and ritual life for near 20,000 years.

Many of these cemetery sites have been raided by the museums along with private collectors and most of these ancient gravesites remain desecrated, now lost to those to whom it means the most. If there are some burial sites that remain then it is my solemn wish that no one discovers them. Such desecration should be confined the collectors own mortuaries and burial sites, let the museums put on display the Kings and Queens of England and other of their ancestors and leave people to their own.

Normally we keep to the beautiful Carnarvon Gorge region where the area is also rich in art sites to be found, spectacular enough to be considered some of the richest in the world.

One of the greatest delights during our stay though was in exploring and learning of the tales of the wild colonial sons of this the Maranoa. Mount Moffatt was also the home of the Kenniff brothers, Partrick and James, expert horsemen who initially worked around the homesteads and stations at the end of the 19th century. They were legendary outlaws of the Outback, born to a time when cattle duffing or moon-lighting as it was more commonly known, as well as horse thievery was common and the brothers were very good at it. So good that the Government of the time revoked the lease on their holding and they were forced to roam the Maranoa with the horse mobs they managed, undoubtedly aided and abetted by the dispossessed tribesmen who were also expected to work around the homesteads, often unpaid, receiving only food in return if they were fortunate. These men of the colonial era roamed the Outback searching for food and a place for their dispossessed families to survive in a world which had once been their own exclusively.

By Easter in 1902 the Kenniff brothers lifestyle however came to an abrupt halt when the constabulary of the day, along with a local station owner and a Aboriginal tracker found them on the plateau above Carnarvon Gorge at the source of the Carnarvon River and the brothers fought a battle and ultimately murdered their attackers. They were bought to a colonial justice in the end, though James lived until a ripe old age after a stint in gaol, passing from this world in the Outback pioneering gold town of Charters Towers in Far North Queensland in 1940, while his brother hung for his perceived crimes protesting his innocence to the end. You can read all about the trial on the Trove site in the new-sheets of the day.

What is born witness to this tale though is the magnificent Kenniff cave where the two colonial sons hid out for a great deal of the time high on the tablelands overlooking the Maranoa. This cave is now closed to the public, due to the unstable sandstone roof which is considered dangerous, but the walls are adorned with magnificent stencilled art of the local native mobs, art which stretches back 19,500 yrs; further back than the colonization of the America’s by the American Indian, much further back than Moses and the birth of the western civilization and back with the passing of the last ice age.

No matter where I travel across this land Australia there is always one theme, which follows me be it deep into the Outback or along the beautiful shorelines… why are we not taught more of our own history!

To read more travel tales, or explore the world of the Australian Aboriginal Shaman told in a fictional tale and to discover other works on traveling around Aus. visit my web at http://janhawkins.com.au/Publications.html and check out the discounts available for my readers and friends. My books can also be found at Amazon.com in both print and e-book. e-books are available from $3.99-$5.99 at Amazon.com

The Official Facebook page for the  The Dreaming Series  is where you can discover the research behind the stories and meet others with similar interests and become part of discovering an Ancient world.

Facebook Page: Flash Fiction :  Meet e  :  A Sci-fi mystery, a new world, one which touches us all.  A short and entertaining read.