As an Aussie I get frustrated when I hear the comment that Australia has no culture or history. Or at the most a history that is only 200+ years old. I love history and it is a love that was engendered after I left formal education because the education system in our country focuses only on the history of the Northern Hemisphere with a smattering of English colonial thrown in… Kings, Queens and Dynasties. Something which I find I can’t relate to at all as I don’t identify with a social strata or class. I am simply Australian along with 22 million other Aussies of many creeds, colours and beliefs. Me and mine have been Aussies for hundreds of years and many generations.

I have had the opportunity to travel broadly, both within Aus and overseas and one of the most frustrating things I found in the history of places I visited in the Northern Hemisphere was that their history was so recent, barely 1,500 yrs old. Beyond that there often was zitto, now that is truly what could be termed recent. I have come to realize that when history is spoken of, people tend only to refer to the last few thousand years, totally ignoring everything beyond that, which is amazing really when you consider it. There in my dilemma lay… I don’t relate at all to what people generally consider as history.

Looking out over Central Australia

I find history in rocks, in ancient shoals, even in trees, which bear the weight of hundreds if not thousands of years. I look at a windswept rock formation and see a remarkable history that has looked-out over the land unchanged for tens of thousands of years and I take pride that our first Australians looked after the land so well, they understood it, and loved it well. I enjoy the isolation and remote places that have born witness to millennia of man treading across his country. I examine ancient rock art closely, which is the remnant of families settled around a campfire and the entertainment they took, or the ceremonies and stories they told as they comforted and amused each other and paced through their daily lives. 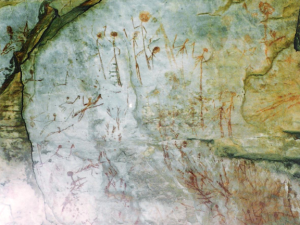 Or even the beautiful art the like of which is found in Kakadu and the Kimberley region and many other places scattered across our continent, which tells ancient stories, speaks of ancient battles and a Lore that goes back well beyond the great migrations of man into Northern Europe. Australian history is a history of the very first migrations of modern man.

When I was touring around Europe some time ago I realized that I found more relevant history in the Scandinavian and Germanic legends, Viking feats and the Irish Lore of the little people and the like. I sort out the truly ancient histories of their Lore and followed the tales of Druid times and Celtic myths. This I related too, perhaps because this is where I see an interpretive history, which holds a promise of the past long forgotten or lost in the often one-sided babble of rhetoric that is modern history. I was amused by the realization that on every headland there was a fort or a ruin. It made me see that this was a land or a world where man fought and died regularly over a patch of land. 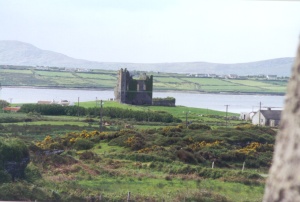 In Aus this isn’t the case. There are no ancient forts or crumbling ruins of antiquity, which sit on our headlands and mountain-passes despite Australia being the oldest land continually inhabited by any one race or culture. Man here didn’t fight over what was their own and their neighbour’s country. They had no need to acquire their neighbours land, they belonged to their own land and their relationship to this was bound up in their own Lore. To covet the neighbours patch was totally alien to the tribal people across this vast continent who had a very spiritual understanding and relationship to their land. For starters, their neighbours were commonly their in-laws or family, people they would find family amongst, so killing them off was not seen as sensible or even desirable. In general they shared their country in times of drought and need, it was a basic understanding and a system of survival. The things they warred over were their women and their Lore mostly.

In the ancient art and etchings which the tribal Aboriginal people left behind I look for the meaning or the identity of the artist, the story behind the remnant of the past. It is a past which outstrips much of what is considered history in other countries by thousands upon thousands of years. These ancient markings can be as old as 50,000 years or more and are commonly 25,000 yrs old or there-about’s. This is well beyond the last ice age and well beyond any human industry or commerce, which is recognized by the rest of the world as being ancient. European industry and culture is barely 8,000 yrs at the absolute extreme and North American native history is 15,000 – 17,000 yrs old. The ancestors of the Aboriginal population split off from the ancestors of the European and Asian populations between 62,000 and 75,000 years ago—roughly 24,000 years before the European and Asian populations split off from each other. So you can see why when others say that Aus has no culture and history to talk of I find the statement foolish and ignorant in the extreme.

If you want to see a truly great monumental building created by any living being, take a look at the Great Barrier Reef. It was created by the tiniest of creatures and yet it is the biggest of any city which ever graced the earth and what is more… it is the oldest city on the earth and humans had absolutely nothing to do with its building. Does that make you think about what my type of history really is about?

To read more travel tales, or explore the world of the Australian Aboriginal Shaman told in a fictional tale and to discover other works on traveling around Aus. visit my web at http://janhawkins.com.au and check out the discounts available for my readers and friends on ‘Where to find Jans Books’. My books can also be found at Amazon.com in both print and e-book. The Dreaming Series is also available in e-books from $3.99-$5.99 at Amazon.com

My Blog Space: I am moving my blog to WordPress, here. You can find older postings at Createspace My regular, and much loved followers can easily subscribe with a single click. 🙂 I find the new space more user friendly and easier to manage.

The Official Facebook page for the  The Dreaming Series  is where you can discover the research behind the stories and meet others with similar interests and become part of discovering an Ancient world.

Facebook Page: Flash Fiction :  Meet e  :  A Sci-fi mystery, a new world, one which touches us all.  Short and entertaining reads which begs to question.