I enjoy a good adventure, I really do and this month I have just released another edition of The Around the Campfire Tales and travelogues. This is a popular little series of stories of travel available in e-book and print available at Amazon.com, and they are a very different approach from other travel books. We don’t explore the best prices, or the best motels etc. but it is about the adventure of the trip and it is a candid account. They are a collection of campfire stories and recounts and ‘Cape York’ has to be one of the most Adventurous tours in the series.

Trying to explain the adventure of Cape York in Far North Queensland is impossible. It is wilderness, it is vast and it is a place like no other. It is a wilderness that is undefined and which offers adventures in the bucket-load without even leaving the confines of the vehicle which is why the 4×4 driver loves it so much. Touring the Cape York wilderness is like visiting a theme park, you line up for hours on the best rides (equate this to travel over corrugated roads) and then you have the ride of your life!

In this edition of the Campfire tales I had the privilege of travelling through and exploring the Cape Country in Far North Queensland at the very tip of Aus. Venturing into this region is not for the fool hardy, though there are some really hardy fools up there. It is a truly vast remote wilderness at the tip of Queensland and is one of the last and enormously vast remaining wilderness areas on the Earth.

My vision on what was Cape York before I went there was firstly, rainforest. I was soon disabused of this although there are lovely stretches and pockets of rainforest. I think what inspired that vision is the beautiful fuss people make about the Daintree Rainforest (another very different adventure) which is on the east coast and abuts Cape York… your introduction if you like to this vast wilderness.

Anyone venturing into Cape York should first travel the Bloomfield Track between Port Douglas and Cooktown, if nothing else it helps prepare you and you are a damn site closer to help if you can’t manage it… and it is easier on the nerves. Do not travel the Creb track (literally next door to the Bloomfield track) unless you truly want to experience forbie driving and all its worst inherent risks within a rainforest. You will need suitable tyres, solid experience and recovery gear and most definitely a buddy to travel with you. Besides… they sensibly close the Creb track often.

Now people do travel this region in normal two wheel drive vehicles… you just have to look at the wrecks along the way and the evidence of these in the roadhouses to see that. Not to mention the signature bits and pieces nailed to trees where the wilderness has won. It is a fact that our army gets up into this region regularly to test our men is a telling reality. Meeting these convoys in the cape is really something as you can literally see a town on the move. But given the vast area of what is savannah country and heathlands, and that there is literally only one backbone of a road, the development road, with all its nobs and notorious dust bowls and sand traps not to mention those miles of corrugations, it is amazing that you don’t see our army on the move more often, but the area is simply too vast. 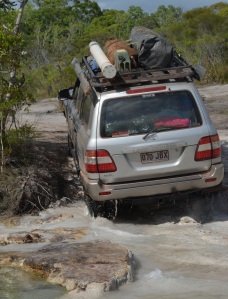 The Cape, at its broadest is 430klm wide out from Bloomfield and it is longest, 660klm to the tip. There is no demarcation aside from the ocean waters defining the region of the cape but believe me… it is vast and you simply know when you have arrived! And it is truly forbie heaven. Most of the area is cattle country (some 60% is under cattle lease with vast remote Cattle Stations working the country in what are really wilderness runs) though the Cape actually consists of a mix of National park which tends to the East coast and Traditional lands which tend to the west coast. People regularly cross from East to West across the peninsula to avoid either the winds or the rain.

There really is only one large settlement, or town and that is Weipa on the west coast. Everything else is a small settlement or roadhouse stop. Such places a Bamaga, Seisia (both at the top) or Coen, which is smack inland leaning to the east coast.

What makes the Cape so notorious though is the weather… there is simply no avoiding it, and no changing it. You are at the mercy of the Lightening Men so just get over it. If it rains… everyone pays attention because if you get caught in the wet, you fly out (if you can get to a landing strip) or you stay put for weeks if not months! Recovering a vehicle on the Cape is monumentally expensive, not to mention a trailer or caravan, which I for one would think twice about taking into this region. A camper trailer will make it but expect damage it WILL happen.

There is so much I could say that it would make a book… and it now has. But in the meantime I cannot close without saying something about the notorious Telegraph Track, the creeks and the rivers. The tracks and rivers are what make Cape York such an adventure. The Old Telegraph Track is considered moderate to hard in the dry; in the wet… Unbelievable and often undoable, the king of the tracks in the Cape is the Old Telegraph Track, which runs for some 30-40 odd klm really, and I do mean odd! But you think that is not far? Try it!  People camp along the track just for the entertainment of watching those who try to conquer the track for the pure adrenaline rush of it, not to mention achievement in boasting rights.

The challenge is first just getting there and then the entertainment begins. If you doubt the challenge of the Old Telegraph Track pop over to Utube and type it in. Entertainment plus! Try the most infamous of its challenges… Gunshot Creek, Cockatoo Creek and Palm Creek just to name a few of the challenges and remember most of these clips are done in the dry season. The Wet, is a whole other adventure if it is at all possible. 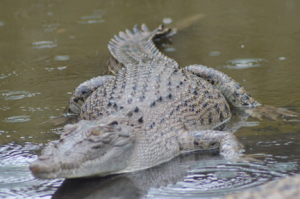 I loved it! and I hated it. But we will do it again and next time it will be the full length of the Old Telegraph Track, not to mention the fishing and I can’t wait. Even just getting along the track as far as the few short klm into Fruit Bat Falls and Twin Falls is a challenge… that first crossing can be a fine test. But the reward is brilliant! They have to be some of the most delightful stops on the entire peninsula. Ohh… a short word on the wildlife… there are big lizards up there with sharp teeth and appetites!

Ps… hire vehicles are not permitted beyond Cape Tribulation which is the start of the Bloomfield Track nor into the Cape region in general which is considered ‘off the tar’ though there are stretches of sound tar surface. Which means – that while the place is buzzing with tourists on the move in the dry season and they are all out for the adventure of it. Usually they have had to think deeply about what they are doing and it is a 4×4 heaven and a boys toys paradise. They are an interesting lot actually and their fishing camps are usually so raw they are photo worthy.

I write a series of travelogues that explore in part, Australia. They are travelogues btw… I am bringing nothing but the adventure to you. If you would like to read more, check out my Web page  on the ‘Around the Campfire Series’ for cheap little ebooks. Or for print publications pop over to my Author site.  Till next time.

To explore fictionalised tales of the Australian Shaman and an Ancient Aboriginal Lore by Author Jan Hawkins, check out the page on
The Dreaming Series.
Available in e-book and print.