A quote from: ‘Following the Equator’ 1897 Mark Twain 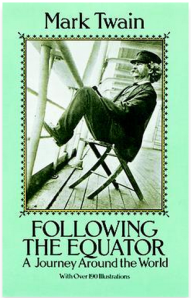 Learning about Colonial Aus. is a passion of mine, as many of my readers know. Discovering Mark Twain’s travelogues was truly a delight … how ignorant of me not to know of his writings about Australia at the turn of the century!

Ignorance is bliss is it not? We often read the most contemporary of works instead of those older texts, the classics and the hidden gems to be found in the Trove and the newssheets of yesteryear and on dusty shelves of a library. I have always enjoyed delving into the peoples history of yesteryear in old newssheets, but there is never enough time to read all that I would so enjoy to venture into. Mark Twain was an author such as I had not fully explored. I guess him being a Yank (seppo’ in colloquial terms) had something to do with this, I of course had read Huckleberry Finn and others but I had enough trouble with time in exploring our Aussie writers … so much to read, so little time.

What Mark Twain was referring to in the quoted text is the lies and misinformation Australians are fed even back as far as our Federation in 1901.

A concealment of the truth about our own history, this our colonial history and the history of ‘The Killing Times’ or the murder of our tribal people by the Squattocracy and the Native Police Force in the great land grab of the colonial era by those in political power, the “landed gentry” and their friends and associates no less. That this concealment is still supported today is clearly reflected in the ongoing lack in our Education System as pointed out in another recent post on the links between racisim and our current Education System. It is our nations greatest shame.

Mark Twain’s writings and publications are available for free on the net. I love the Guttenberg Project where you can find such gems easily as it brings such literature within the grasp for nicks. As a resource for the researcher and even those who read for the sheer pleasure of discovery it is an invaluable web site.

In a recent post I wrote about another book I had read, ‘Conspiracy of Silence’, a new publication and a remarkable book, one that is well researched and which draws into the light of day the deeds of the colonial era. I had known of the decimation and murder of the tribal Aboriginal Aussies in our colonial history but not of the brutal and inhuman extent of the practices of the Squattocracy and of the Native Police Force. It was gruelling reading but I discovered as I faced a new day after completing the book that more than anything I was angry! Angry that these omission’s in our history had be kept secret to preserve the (lacking) integrity of a class of people who tried and failed to stamp Aus. with their arrogance and imported sense of elitism, albeit in utilizing the more brutal side of a dispossessed tribal men within the Native Police Force of the day.

Neither group is immune from condemnation in my view. Murder is Murder, brutality is brutality; When you aim to kill, this is exactly what you are doing in the view of your victim … there are no half measures or lamer excuses or justifications when it comes to taking a life. This is even the tenet of Aboriginal Lore as well as the law of nature, a simple reality that begs scrutiny.

That the Squattocracy failed to impose on Aus. an English class structure was and is a blessing but that these government figures that were truly notorious social misfits then attempted to hide the truth of the atrocities in our history is a gross crime. That they then stamped our education system even today, particularly in regards to history with English crap and propaganda infuriates me.

Thankfully, morons such as these are now dead … however what remains is the consistent attempt to conceal their deadly and inhumane deeds and the sanctioning of the same by those who were essentially public figures of the day, who are held up to public acclaim even now. I would much prefer that our history have some truth in it, and considerably more integrity than it now enjoys. Even Mark Twain, in his writings noted the atrocities of the day and this is what bought me to examine his publications.

Yep! I am pissy! I am very angry at the deceit of our public leaders of the past though it should be noted that many of the newssheet’s of the day, and the majority of Australian colonists condemned what they knew of the massacres, those that came to their knowledge as can be seen in the court accounts of the day. What they didn’t know was that these murders could be counted in the tens of thousands if not hundreds of thousands. This was was why the government bodies of the same day made it illegal for the courts to be able to accept the testimony of any Aboriginal person up until 1884, and why the Native Police Force (a force of some 70yrs duration) were forbidden to report in any detail the activities in which they were engaged in.

I am also angry at the public servants and historians of today, politicians and educational leaders who maintain this historical farce. I am truly angry at every public figure or historian who persists in maintaining this deceit. I just haven’t yet decided about in what way I am going to deal with my anger but I will find an effective way. I have written about these injustices in my novels and touched on Aboriginal colonial massacres in Book 4, Caverns of the Dreamtime, but I have not done this subject justice as of yet.

What about you? Shouldn’t our kids, those who are our legacy to a future know the truth about our past.

Send someone an email and demand that the Education in regards to our history be taught with some truth and integrity … begin with our Federal Educational Minister, he might just do something if he is worth his salt.

A Colonial Rationalization for murder: Is there really any excuse?

In the words of Mark Twain in his dilemma in acknowledging the murders of tribal people : from Following the Equator (Circ. 1897)

The white man’s spirit was right, but his method was wrong. His spirit was the spirit which the civilized white has always exhibited toward the savage, but the use of poison was a departure from custom. True, it was merely a technical departure, not a real one; still, it was a departure, and therefore a mistake, in my opinion.

It was better, kinder, swifter, and much more humane than a number of the methods which have been sanctified by custom, but that does not justify its employment. That is, it does not wholly justify it. Its unusual nature makes it stand out and attract an amount of attention which it is not entitled to. It takes hold upon morbid imaginations and they work it up into a sort of exhibition of cruelty, and this smirches the good name of our civilization, whereas one of the old harsher methods would have had no such effect because usage has made those methods familiar to us and innocent.

Mrs. Praed says of the poisoner, “That squatter deserves to have his name handed down to the contempt of posterity.”

I am sorry to hear her say that. I myself blame him for one thing, and severely, but I stop there. I blame him for, the indiscretion of introducing a novelty which was calculated to attract attention to our civilization. There was no occasion to do that. It was his duty, and it is every loyal man’s duty to protect that heritage in every way he can; and the best way to do that is to attract attention elsewhere.

The squatter’s judgment was bad—that is plain; but his heart was right. He is almost the only pioneering representative of civilization in history who has risen above the prejudices of his caste and his heredity and tried to introduce the element of mercy into the superior race’s dealings with the savage. His name is lost, and it is a pity; for it deserves to be handed down to posterity with homage and reverence.