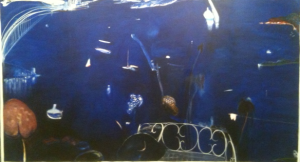 I’m currently in Sydney, looking out over the CBD and enjoying the Sydney Corroboree. To be back in the city of my birth is a delight and truly delightful, but to be able to enjoy the city, drink in the flavour of all that is Sydney and explore its museums, galleries and the city itself is a real treat.

The pic’ I have chosen to head this post is a art work by Brett Whitley, The Balcony; It depicts the beautiful Sydney Harbour and gives you the wonderful sense of freedom which is so much part of the Australian culture and people.

Sydney is like a conglomerate of lives, of histories and of people. I love to walk its streets and think back to the history of the city. Then to recall beyond that into the history of its people, that which stretches back beyond the mere 200 years since colonization. With the activities of the Sydney Corroboree available in all corners of the city it has been wonderful to venture into history and culture and to discover what the people of Aus have made now of their diverse cultures. 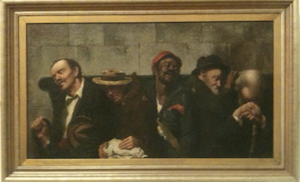 The social diversity of the city of Sydney can be found in the painting by Antonio Dattilo-Rubbo, Poverty makes strange bedfellows, painted in 1905 depicting a few of the many blended cultures of the Sydney population to be once found in the streets, markets and pubs of the city. A diversity which is so much the heart of this wonderful city.

From my city apartment where I have been staying I have had the opportunity to watch the city. Have you ever noticed that people never look up. I have been able to watch the life and people of the city pass by, so very much involved in its own natural motion. People walk the streets immersed in their own lives and rarely glance above their natural line of sight. Standing out on my teeny weeny balcony apartment where I am staying, watching as the sun dribbles along the streets at sun-up and into the day I have noticed this. I watch the people dragging their weary feet homeward while others sprint lightly to begin their day while above them, up on the 5th story I watched quietly. I remained largely unnoticed, which is just as well as I was still in my pj’s hugging a cuppa in the early dawn and watching the world unfold below.

Yesterday I delved into the mystic knowledge of Aboriginal Astronomy when I attended a lecture on Emu Dreaming by Ray Norris and listened to how these ancient tribal societies saw their world in the stars. How they followed their many complex seasons in the rising of the dark shape of the emu in the movement of his dark form across the night skies and the tales of warriors canoeing their way across the heavens towards the seven sisters, otherwise known as Pleiades.

The ancient tribes marked their world, their stories and histories with tales very different and yet similar to those relating to the skies of the Northern Hemisphere.

Only in Aus they didn’t identify with the Greek and Roman tales and Latin definitions of their interpretation of the skies overhead, the Australian tribal interpretation is much, much older than this. The northern world of gods and warriors is juvenile when compared to Australian astronomy which is thought to be much older.  Quite possibly the astrological version of histories the Australian Traditional Aborigine could tell would account for mans first concept of astronomy altogether. The northern version of the skies and world is upside down to those of us in the southern hemisphere and the descriptions from the north are nonsensical. These tales and legends whose origins are born in the Southern Skies are unique, rich in colour and wonderful to hear as they are as old as mans observations in the wonder of the night skies.

Today I delved into the Art Galleries and enjoyed the art and account of other more contemporary storytellers who relate their histories and views in art. Sydney’s history is the account of diverse cultures, firstly Aboriginal, then colonial which touches on Asian, European, Scottish, Irish and Islander as well as many others which offer real diversity.

Our histories are however predominantly those of a traditional native people and still others of convict descent and a blending of the two as well as emigrants looking for a better life. Although the world is told more of the English Squattocracy, which tried so hard to rule and subjugate our society modelling it after their own origins in their ‘Mother’ country. It is about time we were taught more of our real history.

While the Squattocracy and their political mates did manage to rule over the people from within government, they failed to capture the heart of the country and budding nation as seen depicted in the art of Sydney Nolan in his art featuring Ned Kelly, a infamous Australian and a bush ranger and dissenter  of Irish heritage who did captured the heart of the nation and continues to do so in his struggle against unjust tyranny. 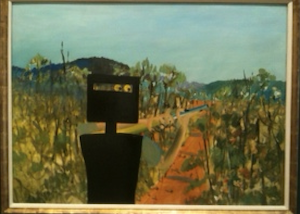 Sydney is a place of hidden worlds, a conglomerate of different peoples each as valuable as the other and in their diversity each should be equally valued. It is a special pleasure to visit the city and touch its heart. It is this same sense that I try to bring to my writing and novels.

To read more travel tales, or explore the world of the Australian Aboriginal Shaman told in a fictional tale and to discover other works on traveling around Aus. visit my web at http://janhawkins.com.au and check out the discounts available for my readers and friends on ‘Where to find Jan’s Books’.

Author on Amazon.com & Amazon.co.uk Books available in e-book and print

The Dreaming Series is also available in e-books from $3.99-$5.99 at Amazon.com in .mobi and at Smashwords.com in other multi formats for e-books.
Check out the 30% DISCOUNT on the E-Books at Smashwords.com. Details HERE

1 thought on “Sydney, Aboriginies and Convicts”