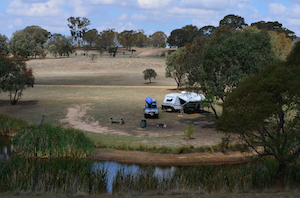 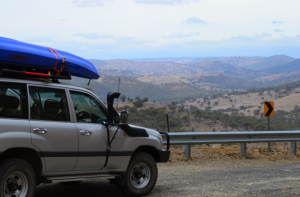 Best of all though we have taken the time to visit the charming little towns off the beaten track, enjoying the adventure of exploring while stocking up on the small essentials of life. Meeting the locals and chatting to other travellers is truly the best of the best.

The old gold fields of the Turon, on the Meroo such as Sofala and those around Bathurst such as Ophir have seen us playing and our finds have been minimal. If I had a buck for every tent peg, bullet or piece of shrapnel found we would be rich. But we are celebrating our freedoms none the less as it has been a wonderful interlude.

This is our lifestyle and as said in a previous post on freecamping … we are amongst a demographic group of adventurers who wander the continent. Some call us Grey Nomads, others call us Silverbacks… for us we are simply ‘On the Wallaby’ jumping from camp to camp.

Staying in caravan parks is not on the agenda, it is merely a common necessity for those who enjoy public amenities occasionally, or who aren’t equipped to be fully independent. If there were no freecamps facilities we would be camped up 10klm out of some town, enjoying the peace of an area and making our own freecamp. We would not be in a caravan park and of this I am certain.

Anyways… onto the adventure. Macquarie Woods is one of the largest and most comfortable camps around and it is often overlooked by freecampers as it is midway between places. Here we have found an orchid of fruit bearing trees, a community that cares for its recreation area’s and one which welcomes travellers. There are public toilets, BBQ’s and ponds of tea tree coloured water likely used by the forestry when needed and which provides water for the wild creatures of the bush. We too use this water to extend our supply though we do not drink it! 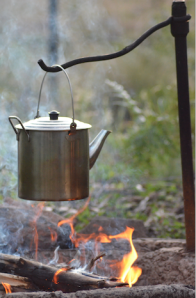 The rabbits and roo’s have been as entertaining as the birds, the tiny wrens and the larger parrots that visit daily. The land was originally the holding of Lachlan Macquarie, one of our early Governors and one of our greatest. He officially coined our countries identity in his account back to England of ‘New South Wales, alias Australia.’

The land, one of his many holdings, as was the practice of Governors in the land grab of the colonial era, is now forestry but the remnant of earlier endeavours in settlement is evident here and I love touching the history.

We walked the old paths, crossing aged wooden bridges and stone terraces on our daily jaunts with the pups to exercise them. We’ve visited the lovely colonial town of Orange where you can still see the colonial architecture so much in evidence there, this on more than one occasion and we have enjoyed being part of the community if only for a short time. It’s been like a holiday within our adventures though some would say we are on a permanent holiday anyway … and I wouldn’t argue with that. 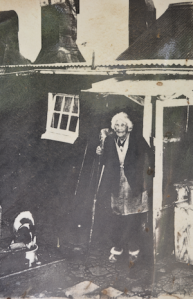 One of the nicest things though was in our daily walks, exploring the country around us. We stumbled over an old abandoned building which was once the home and hearth of a wonderful pioneer, Sylvia Cashen. Cashen Lane is the turn-off you take to Macquarie Woods Rec. area and I always wonder where street names come from.

Haven’t you ever wondered about street names, their histories and assignments. Take Alice St … Alice must have been a busy girl, her name is sprinkled all over Brisbane and Ipswich and I wonder about her reputation? But here Cashen Lane is all about a lovely person and in visiting her home, now abandoned, I came away with only photo’s and a touch of nostalgia. There are some things in this world that are just so precious in memories. 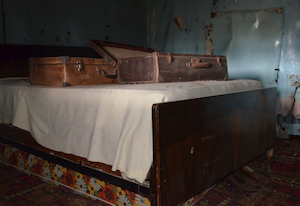 You can read the write-up below, though it is a little difficult. I was unable to find the transcript on-line so bear with me.

Now we are off and headed to the cities for a short sojourn to catch up with family and then it is north we go again … people to meet, things to do.

I love this land! Help us look after it, and our freedoms. 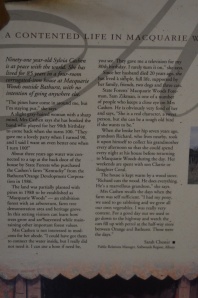 The story of Sylvia Cahsen