We are on R&R in Port Macquarie and one of the nicest things about the old penal settlements, those that have come into their own down the century since colonial times, is walking around the site of the old settlement and seeking out the remnant of another age. We have lost so much that is rich and rigorous of colonial times that it is heartbreaking. But here they have endeavoured to preserve their fumbling beginnings where they can, fighting in the battle against progress and commerce.

Having chosen the CBD of Port Macquarie specifically for a rat around the old battlements we at first set out to find some kind of guide to help us. A thousand gold stars to Richard Grimmond who complied the visitor’s Guide through Historic Port Macquarie to set our eager little feet on the path. We picked up the guide at the Information Centre for free, wonderful places that they are, and set out to the ringing tones of hubby reading aloud as we paced out the old convict precinct.

The booklet was full of glorious tales and the dread of a convict settlement, which saw its birth in 1821 when the first of the convicts arrived. Continuing as a penal settlement until 1847 taking free settlers from 1830. OK … got it; that’s the stuffy stuff.

I’m also on the hunt for an ancestor, one of the few who didn’t come out courtesy of the King at the turn of the century in the convict era and this hunt has bought me to Port Macquarie along with other things. I know his name and the name of his wife along with his kids and I believe he worked for a while teaching, one of the very early school groups before formalized education. Details however are sketchy in these very early days so I scratch around for rarefied records where I can find them and it’s a lot of fun. My very own nemesis … Old George though gives me nightmares! 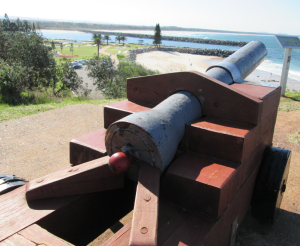 Diving into the day-to-day workings of this early penal settlement is delightful. I loved the tale of the convict escape on 1840 when realizing that convicts had stolen the government schooner the Isablella.

When you stand on the high point of the old settlement you can practically see the soldiers rushed down from their barracks high on the hill where the school now sits, scurrying to the Canons at Gaol Point and loading them hurriedly to fire on the hapless escapees. You don’t appreciate this until you squat at the head of the one remaining canon, still sited at the old Gaol Point and bring to mind the red coats, being harassed by their commander to fire the blasted cannon.

The desperation of the soldiers as they watched their boat, one of the very few available in the early settlement in what was this remote penal outpost, battle through the breakers on the dangerous bar. Struggling under the hands of inexperienced men in a desperate bid for freedom … Watching it sail off into the intractable blue water and beyond their reach, leaving the settlement without even the means to reach the far shore.  The canon shot fell far short of the mark and you can feel the despair of the young penal settlement of that day.

Imagine the elation of the escapee’s in thwarting the soldiers, the fear of the unknown and the threat of the wild Aboriginal tribes ahead in the bid for Canton (China) as was the common thought of the day. A place they would never see with a likely fate of starvation or death ahead as they made their way up the vast uncivilized eastern coastline of the continent.

But our visit wasn’t all history and battle, we also enjoyed the humour of the breakwaters, the arms of which now shelter boats as they cross what is still a quite dangerous bar. Along the rocks, battlements of the sea now are painted messages from campers, travellers and tourists to the world, a graffiti tolerated by those who see in this old practice humour and history.

It is a real delight to wander down along the broadwalk reading these memorials as you weave amongst the fishermen and tourists.

What was a truly special delight though, was the many pods of dolphins feeding in the rapid flow of the tide, cutting up and down through the water and delighting those looking on who were scrambling for a happy snap.

I love also watching the flight each night of a billion fruit bats from our balcony, who leave the city in search of their night feed to the chorus of thousands rainbow lorikeets who have arrived sated from their day, as they settle for the night in the beautiful pine trees which grace the city.

It has been truly a wonderful visit, our time in the great little seaside city. If ever you have the opportunity take the time to look around you, suss out the soul of the place where you are and enjoy the adventure of the world that is too often left behind. Look back and embrace our history, heritage and the lives of those who have moulded your own. You will find a world that is wonderfully rich and rewarding like none other.

You can find out more about Jan at her web site. For more travel tales visit the blog collection at ‘Oldies at Large’ and join Jan as she tours around. If you like the posts, leave your mark and click the like button… it is always encouraging. Travel well.