In the last weeks I have had opportunity to consider the art of storytelling relative to culture and it has been something of a revelation. Storytelling is close to my heart and I am most comfortable in my skin when I describe myself as a storyteller. But just what is a storyteller and are there ever stories that are not yours to tell, even though they are those that you create? 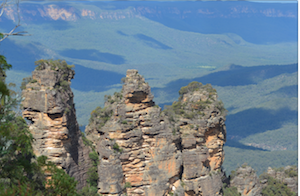 As a child I grew up with the wonderful story of the Three Sisters, they are three statuesque rock formations, which are famed around Australia. As a child I would eagerly listen to the Australian Aboriginal tale of how they came to be within legend and I searched them in wonder when the opportunity arose, eagerly looking for familiar facial forms in the rocks. It is a romantic and dramatic tale of love, desire and quest and wrapped around the three pinnacles, which sit on the edge of the escarpment at Katoomba.

The Aboriginal people from all over Aus. accepted this story and took a certain pride in the legend as being theirs and yet was it? Or did it belong to all Australians?

Cultural tales and legends are something that I love to hear recounted, be they Aboriginal in origin or drawn from any culture such as the rich Irish legends, or the epic Scottish tales… to me they are all wonderful. They are maps and glimpses into a past eon. Each has buried within its telling hints of history and prehistory. They recount epic deeds and talk of wondrous things as man tried to make sense of his world. They give flight to the imagination too but what are they really and do they ever cease to be quite simply an informative entertainment? Does the exercise in the art of storytelling become something else at some point in a person’s perception?

Some time ago I discovered that the story of the ‘Three Sisters’ did not have its origins in any indigenous story but were the creation of a storyteller, an Australian who wanted to promote the region and I was left wondering how that made me feel.

Did this make the story any the less realistic to the listener? What was it about the story that had so captured the imagination of so many people who flock to this landmark? Even in the recent visit of the royal couple Will and Kate you could witness the draw these three edifices had in the imagination of their adoring public.

It is all something to ponder… is storytelling ever not simply what you think it is? Does the colour of your skin, or the origins of the story really make any difference when you consider Country to be yours and the story to be of your heritage. A history you know and love and wish to share with others within the weaving of a tale?

There is without a doubt a line to be drawn in the sand in regards to plagiarism however when the storyteller creates the story, from whatever source then it becomes truly theirs. It also wraps the listener in a perception and fantasy often, the emotion of which becomes their own and in that, it is memorable. The retelling of that story can be a delight to the storyteller as it is evidence to my mind that the story having been already told is a goodie and aren’t stories meant to be recounted and retold to be even relevant?

Within Australia, cultures have been blended a great deal to the betterment of our nation and we have created our own culture from this blend. It’s simply our own personal cross-cultural experience, one that makes us who we are. A presence that has gone on to create and recreate the Australian character, giving birth to a strong and individual, cultural presence on the world stage.

Recognizing your culture and celebrating the same is the essence of an identity and the foundation in a particular type of self-respect but it should also be realized that culture changes, moulds and settles about you like a comfortable cloak relevant to you as an individual. Removing that cloak and superimposing it with one that you are not familiar with can create a type of self-despair and certainly a confusion.

Pride is truly the person and it is dangerous to destroy this in favour of preserving a culture that is not properly understood or celebrated as a personal history. I have often wondered if you can damage a person by trying to impose a culture on them, one that they do not recognize and there is certainly a danger in doing this.

Youth suicide is endemic in many cultures around the world today and I am left wondering if this is because the young person has lost a sense of their identity, in the desire of others to impose what they believe should be their culture and that of their youth. Would it not be best to simply allow a person to identify with what they find familiar. Identify with what they see and experience.

The high suicide rate of young men has touched my own family and in each case there were alarm bells ringing as the young men struggled with their sense of identity and self. An identity often confused and made irrational by others. I am not saying that such a problem is specific to one culture as in my own experience the young men concerned were from different cultural backgrounds and influences yet they both suffered from confusion in their cultural and personal identity. This was not the only difficulty they had, nor was it the sole contributor to their personal sense of despair but it was certainly a common factor along with substance abuse.

I come from a blended cultural background like all Australians and in my own kids we have given them the knowledge of our individual cultural links, allowing them to choose from which culture they feel they strongly identify with.

One son sees himself strongly connected with the Scottish side of the family, while another of the same parentage identifies with the Scandinavian. I have grandchildren who identify with the Aboriginal culture, while others choose European links and others in the family, such as myself, see their identity as being simply Australian. The one thing they all have in common though is that they are undeniably Australian and very proud of their sense of national heritage. This is their primary identity and our cultural heritage.

So when it comes to storytelling we each draw from our chosen heritage, that which is Australian and they try to understand the richness in the other cultural influences within the family. For it is within being truly Australia that all the cultural diversity of our rich and varied heritage can be found.

For me, I can see danger in denying an Australian cultural heritage in favour of an Aboriginal heritage, or a Scottish one or any other, without the knowledge of where you really belong. You cannot find identity in a heritage which is imposed on you and which is not your own experience and therefore… do you loose the sense of yourself?

Storytelling is much like this and it reinforces your world and sense of belonging. It is simply storytelling that enriches your sense of culture; as being Australian is simply belonging to Country, wherever and whatever that means to the individual and both are the very essence in your sense of identity.

Storytelling, when it is picked apart becomes irrelevant so does ones identity when it too is picked apart, favouring and imposing one part over another. As valuable as a cultural heritage is, it is certainly not as valuable as ones sense of where they truly belong and who they really are regardless of who others think they should be.

Culture is a growing and changing thing. It is not static nor does it remain the same and this is something that we all need to recognize in dealing with our young people and their future within our world.

I am not Scottish, English, Nordic, European or even Aboriginal. I am simply Australian and proud to be so.