The Man and I have hit the Western coastline of the Northern America’s and it couldn’t be more different from the NW central plateau and mountain region. Gone are the Prairie’s and the relative sparsity of the population although the roads are still painfully straight the endless pine trees can still be seen everywhere.

As we are now in the more populated north-west coastal corner freecamping, always a difficulty in the US, has now become evermore difficult. They don’t call it freecamping here, they call it Dispersed Camping or Stealth camping and it is even quite legitimate in some area’s, mostly forest such as in the Gifford Pinchot National Forest NW of Portland Oregon where they even have guidelines available.

There is a great guideline available written also by a guy on a bike at This Link. But mostly Americans don’t commonly recognize Freecamping as a demographic as it is in Aus. and I am sure this comes of population pressures and scarcity of public lands.

Camping in America is not wide spread, not outside a RV at least. Caravanning or RVing is much more so almost to the exclusion of the tent and bicycle set. However forestry campsites are fairly readily available and there are plenty of forest reserves in and around mountain regions. They are in general well used in the summer when the weather is more kind. You should remember though that mostly it is winter here, it snows more commonly than shines in the northern half of the US and even in summer snow banks can be deep in the mountain area’s in their warmer months.

Forestry campsites also are not free, each charges a level of fees per site and they are not uniformly equipped. Some if not most have a manager onsite, usually on the first campsites. Others are self-registration and a ranger will scout the campsite to check who is displaying their registration forms.

Some have basic amenities only, such as a single or double drop type loo while others come equipped with showers as well. You can expect to pay almost the equivalent for a car and tent as you do for a RV and most have caravans or the larger more cumbersome RV’s. The cost is only slightly less without the facility of an electrical hookup and tap on site. Given these considerations it does seem that some forest camps are overpriced, particularly to someone from the freecamping Aussie demographic.

I never did work out the rules that apply to campsites, mostly because they come under the control of different bodies. There is the Federal or National, the State, the Forestry and then private industry. Some private campsites or RV campgrounds are pseudo villages within a town and are commonly housed by incredibly long immovable boxlike trailers that try hard to be houses when they become permanent residences. Many houses in fact are built to look like the large oblong shaped trailer it seems in the same way that many Aussie country homes are built after the miner and labourer style… square with a central hall and commonly front verandah area and kitchen at the back. These trailers are common and uniformly quite dismal and I guess this is where the term ‘trailer trash’ comes from.

In fact the quality of housing for the middle income is quite depressing on a whole and the vast majority of people seem to be middle to mid-low income. Housing it seems is mostly wood as in log, and cladding predominantly where we have travelled. It would be interesting to see if this extends beyond the NW corner of the US.

On a whole though it is a beautiful country with what Aussies would consider extremes of cold or perhaps we are too accustomed to a sun burnt country, wide sandy beaches and blue skies. It is very easy to see why the freecamping demographic is not evident in the US. The climate would be a hash task-master and independent living a cruelty in many respects, only appreciated by the pioneers of the United States. 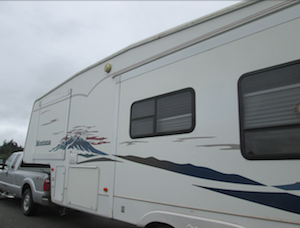 In the entire month of our journey we have only seen one RV of the monster variety, which is equipped with solar and gennies’ are almost unheard of. RV’s of the size that is prevalent over here, particularly in the inner continental plateau region, would never survive the rigors of the Aussie outback roads. They would never make it under so many of our bridges and most certainly never have a hope in hell of getting through the tangled tracks of the Bush.

I begin to realize that I am missing our baby ‘Grampie Flat’. Wonder how she is going in her refit?

Read the full travelogue of Jans adventures in the e-book ‘The Rockies and the Greater NW USA’ now available at Amazon for just $US1.99