There is one place that I have always had a yen to visit. It’s a castle, up on the tablelands near Innisfail FNQ. Paronella Park has always represented for me the determination, the dedication to family and the efforts in dynastic building, which many of our early emigrants bought to Aus in the last 150 yrs or so. They bought with them their dreams for a better future and this should be celebrated.

Our Aussie history flaps on about the English, even though they represent a relatively small, but powerful genealogical sector of our nation. Some would say overpowering or over-possessive even, and they would be right.

The creators of Paronella Park FNQ

The reality is however that Australia is made up of people from many nations, far more than just the English, which were the bossy ones. We have the early European settlers who travelled across Europe to catch a boat out of Britain to a new and strange world in later half of the 1800’s. Commonly accounted as British emigrants as they left from British shores they were however largely German, Prussian, Irish and Scottish.

Then there are our Islanders, those who migrated in a natural movement and others bought into Aus via the unregulated and often violent practice of Blackbirding that went on largely in Queensland. Thousands of Islanders who worked the early cane fields of the colony, some indentured voluntarily. Some were contracted and came willingly. Many were simply forced into a form of colonial slavery by the Squattocracy of the day. Their social standing was at level of labour that had been filled up until the 1860’s by the convicts. The elite Squatters or Overlords in Aus. (as they saw themselves) were really no more than self-glorified slavers from a dying and antiquated social creed, one imported from the English sense of nobility that was and is historically undeserved.

Then we have the natural wealth of the land and oceans about Aus, along with the gold discoveries within the young colony that bought the industrious and hard working Asians and Chinese to this land long before the whitefellas ever set foot here. They often were particularly victimized even by government policy as with the native populations. Mind you they also made victims of the tribes people, mostly the women, in a history and trade that goes back many hundreds of years.

The Chinese, or those thought to be of Canton, were victimized both by the native tribes as well as the colonial government of the era. These government edicts controlling the populations were the official racist policies that lead to the notorious ‘White Australia Policy’. A hideous policy that operated in a land and country that only a few years previous was the domain of the dark Aboriginal tribes. It was and remains historically a truly insidious and comic policy if it wasn’t for the tragedy it inspired. The Chinese were harangued and persecuted particularly in the Far North where they clashed with the native tribes as well as other gold miners, so they copped it from both sides.

The industry of the Chinese and Asian emigrants inspired the early colonial uprisings at Lambing Flats NSW, Rockhampton FNQ and the gold fields in general, something we aren’t taught about. Even though these populations bought prosperity to the young colony, they are also associated with the many vices. Often unjustly attributed to them, as the English were responsible for the worst of the early Colonial vices from the earliest of days of settlement. Namely prostitution, drugs, kidnapping, enslavement and vice in general, which were all social practices of the convict era born of convict policy.

One group however who bought a great deal to our national identity, commonly forgotten, are those from around the Mediterranean Sea. The Italian, Greek, German, Prussian and Spanish emigrants who bought with them a richness and wealth in character so often born of the struggle and generational poverty found in the old worlds. Arriving largely after the convict era that formally finished in the 1860-70’s these emigrants came looking for a better future, free of peasant bondage. Many settled in Far North Queensland filling the need for cane workers, which was vacated by the Blackbirding industry once it was finally outlawed.

This to me epitomizes all that Paronella Park is and was once. It is a man’s dream of freedom and prosperity lifted into reality and left as a record of one mans attempts of mastery over his new environment. That man was Josè Paronella and he came to Aus with a dream, which became a reality now enjoyed by many.

The crumbling ruins of Paronella Park are a step into fantasy, one that has become reality. When you look at the old ramparts and moss-covered steps, a wonderful feature of the park, you can almost see sleeping beauty peeping through the windows and dancing around the beautiful greenery of the garden paths.

Built on the edge of a dominating cliff beside a beautiful waterfall, hidden in this wonderland is also evidence of mans ingenuity and the lands mastery over men. You will find one of the earliest of hydro generators, evidence of a deep and adventurous mind Josè had as he built around himself a truly wonderful fantasy world for all to enjoy.

Well worth a visit, the aging and crumbling mansions sits alongside Mena Creek on the Canecutters Way west of Innisfail. It is a celebrations of mans struggle to drag the best of the old world as he saw it, into the often breathless landscape of Aus. 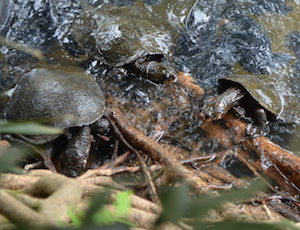 Some of the wildlife

The Spirit and might of Country overcame Paronella and what Josè created in the end and still she dominates, when all is put in balance. But what remains is a testimony to the might and mastery of our Country, Australia, as well as the imagination and industry of man in a careful crumbling and beautiful balance between the two. Thank you Josè for the adventure. I truly enjoyed it. Loved the local pub too…