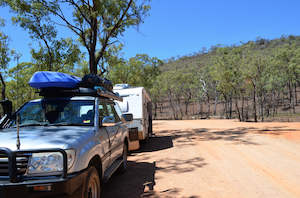 Kalkani, a place of no water. It sits quiet now; a volcanic cone born in the Dreamtime, one weathered to a shadow of its former self. Once it was a mighty volcano, which scarred the earth across great distances leaving lava flows that today attract those adventurers and travellers who are curious and excited about these things.

The Undara lava tubes wore born of this ancient volcano some 190,000 years ago, some weaving deep beneath the earth, others having broken free of their tomb of rock. They are places now that tell the secret story of the Dreamtime creature’s as they too broke free of their subterranean dens. 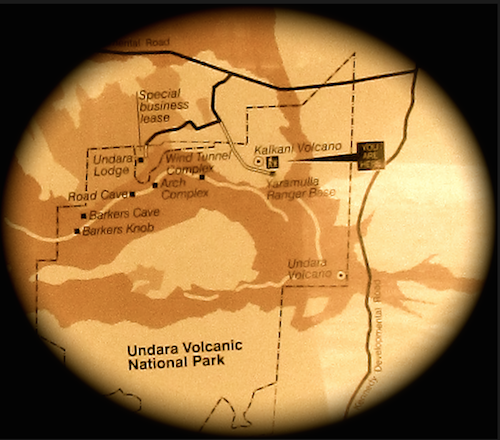 Lava Flow Map of Undara from the Crater

Undara’s lava tubes are said to be some of the longest known lava tubes in the world and their promise is considerable. Managed now by a family of early pioneers you can visit these and be escorted on a guided tour. It unfortunately is the only public access to these rare and fascinating volcanic phenomena here. 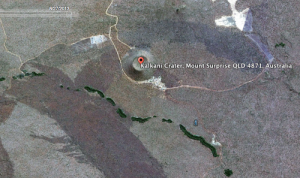 They are found in the savannah lands, 300klm West from Cairns, deep behind the Atherton Tablelands on the plateau. At Undara Lodge they offer a full range of accommodation and experiences but we were more interested in the volcanic landscape and as such spent much of our time at the Undara Volcanic National Park. It was a brilliant experience to tread through this ancient land. You can walk around the Kalkani crater as well as climb up to the rim and circle the edge of the cone as part of the National Park experience and it is well worth the effort.

Beneath the volcanic pumice and igneous rock lay the ancient sea bed of a much earlier era and evidence of this can be seen throughout the Golf country. Here however the remnant of this ancient volcano surrounds you, a volcano that sits at the northern reaches of the Great Dividing Range. Some of the lava flows from Kalkani extend for more than 160klm running north and north-west and from the rim of the now quiet volcano you can follow the lava tube flows in shades of the savannah bush and earth as these tubes have burrowed beneath the ground.

The countryside around the crater showing volcanic features

The wildlife in the region lives comfortably within the protection of the national park. Kangaroos and wallabies are easy to find but it is the beautiful and colourful cockatoos and lorikeets that kept us entertained. Micro bats live deep within the lava tubes and you can see them in flight out across at dusk as they emerge from the caverns to seek out their dinner. But most of all we enjoyed the large and beautiful black cockatoos endemic in this landscape, as they sat high in the trees in their small flocks feasting on the early spring bounty.

We travel west now as we venture across the top end of Australia, coast to coast. We are watching the spring wake the land. It is dry mostly but there is the promise of the monsoon in the air as the world around us holds its breath awaiting the rain. We are racing the monsoon and have thousands of kilometres ahead of us to reach the western coastline. It is a race against time and weather in some of the remotest regions on earth… and it is a wonderful run.

The road-trains, we meet every day in the dust of the Outback roads and tracks

The tourists are mostly headed back south and the freecamps are more accessible as they empty of the southerners. The spring and summer temperatures are building though the nights are still mostly cool. In the daytime the temperatures are stretching into and above the mid 30’s C (90 – 100F) but the humidity for which the Top End is renown has not yet arrived. It is a great time to be exploring this region and we are very much looking forward to this adventure.

If you want to join us on this run… press the ‘follow’ button at the top and subscribe to our blogs. We are looking forward to travelling with you.

Jan is an Author and you can find out more about her books here under the tab ‘The Dreaming,’ for fiction tales of the Ancient Aboriginal Lore woven through contemporary times. Tales of the ancient Kadaitcha, or the Featherfoot of a truly unique Lore.
Or enjoy some of her travelogues and tales of past adventures, published in both e-book and print under Around the Campfires and Oldies at Large.