We are camped up near Tenant Creek in the Northern Territory having crossed the border along the ‘Overlanders Way’, a long and lonely stretch of tar that is the world of the vast grasslands and savannah of the Australian Outback or otherwise known as The Top End. We took a left at the Three Ways, coming in from Queensland and here you either turn left into the heart of the country onto Alice Springs and Adelaide, or right into Kakadu on the way to Katherine and Darwin. The roads are good and as a local has said… “So they should be. NT only has two.”

It is lovely here; it’s a good freecamp with a number of water tanks to ensure the survival of life. All bore fed, all operating well and providing water, a precious commodity here. There are shelters and tables, fireplaces and shade. Someone has their priorities right and the welfare of the travelling public at heart as well as the survival of all manner of desert dwellers.

Travelling long distances in the Northern Territory is a given… distances are immense, settlements sketchy and few, and yet the land reeks of character and attitude. Many of the population are dark skinned, burnt by the sun, some over generations before time and many are still emerging from generations of living hand to mouth within the Outback landscape of the Red Centre. Many in settlements are still struggling with this transition of attitudes about education, socialized structures and city living in general. Many living a hard and difficult life found in the settlement towns around Alice, such as Elliott (Gurungu) and others. They are places seen as being rife with difficulties, social problems and poverty. It is a poverty of the soul though, a poverty often born of frustration, confusion and social conditioning.

Many communities can draw themselves from this poverty of the mind, many have. Even Alice Springs has changed to a more positive and more vibrant community than it was some twenty-five years ago when the town left me with a dreadful unease. Now it is appears a more healthy community, one that is looking to a brighter future and it seems now to nurture its population. I very much enjoyed our time in Alice Springs.

A blurry dawn image of trucking in the Outback

The fur kids are tucked up inside the van at the moment and we are taking particular care of our fluffy companions as well. Our usual worry when we are camped outside of the towns, settling into the vast expanses of the Red Centre, is the large birds on the wing. The raptors that scour the deserts and the tar strip looking for food for their young, who are now in this season and they are becoming quite veracious. The fur kids are just the right size for a tasty meal and this is something we need to be aware of… be it raptors or croc’s there is a great deal to take care with.

It is dawn presently and in the distance, across the red earth, you can hear the plaintive howl of the dingo. He is a native of Aus now, as the whitefella’s are. Though the dingo was bought here some 4,000 years ago as a boat refugee in the natural migration from Asia down into Australia.

This was way back in the time where man in other lands was learning to structure and model the basis of other civilizations, to his profit and advantage. In Australia they developed a very different civilization structure than in the Northern Hemisphere, one based on spiritual values rather than commerce. The tribal values were in large more egalitarian in so many ways if not in the battle of the sexes.

Migration was then a natural progress, which the Governments of our day now fight against in the tide of human attrition and migration throughout the world. Our society has a want and need to collect taxes. They have what can be described as a productive structure, one that can produce wealth for some and tie others to poverty. They tell us we are included in that ‘some’ but I wonder at our world and the steps it is taking towards its own destruction. Migration is not a popular thing in a world based on commerce and industry, as is our society these days. It is something that there is an orchestrated want to control rightly or wrongly. Migration itself has become an industry that feeds the legal and the illegal activities… perhaps one that is necessary in a commercial and overpopulated world greedy for the resources that can be harvested and turned to profit.

Now though the dingo of Aus. is settled happily, this is his land and he is more wolf than dog. There are many names by which he has been known and ‘dog’ is only a recent occurrence. The world ‘dog’ though is an insult to his creed as a dog is considered a descendant of a mixed breed, a true mongrel. The world ‘dog’ was used most recently by the darkest people of the Australian mobs as with the whitefella to insult those of mixed heritage, or those born of whitefella’s in the traditional trade of women in the Outback supported by another era. The trade of women in exchange for many things was an old time honoured cultural practice of the Indigenous Australian Aboriginal tribes. It too was an insult as was often the treatment of such children born of this trade, by both whitefella and blackfella society and I know this from personal experience. Racism cuts both ways and in every incident it is abhorrent, often leading to nowhere descent. It should not be tolerated in any circumstance.

Colonial Sydney at the turn of the last century

The reality is that children of mixed cultures are now the most predominant factor in Australian culture. Be this blackfella’s, whitefellas or yellow-fella’s. Be it those of Italian, Greek, German, Prussian or Anglo and so on … Our society is of made up of many cultural experiences and one of my favourite pics I have in my historical collection is that taken in Sydney at the turn of last century. The copyright of this pic is held btw but you can see the mish-mash mix of cultures evident in Aus. even back then, this more than a hundred years ago. I love this picture, for me it represents most everything that is Australian and born of the cities.

The Dingo’s most powerful ancestor was known in some language groups as the Gia, or devil dog. In legend he has a cousin known as the Djaranin who is more Gia than dingo and I wrote about the Gia in the first two books of the Dreaming Series. 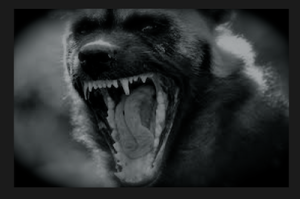 The legendary Djaranin, or the Dogs of Death are also a feature of the first two books of the new Spirit Children series.

However this morning I am listening not to the chorus of the birds but to the call of the dingo. He is a beautiful creature, fine, sleek and the colour of the sandy earth and sun dried grasses. He doesn’t bark but howls instead in his call to his pack. He first came around late yesterday seeking likely recruitments to his pack. I have only heard one call, one howl to the moon so this guy is building his pack and I dare say he has his sights on the fur kids as likely recruits.

The habits of the dingo’s are fascinating and the pack will have an alpha male and female who are the only breeders. The rest are soldiers, nannies or hunters and like the habits and customs of the Traditional Tribal Aboriginals who were the First People of this land, they have a strict code of survival. The human tribes though were groups with many couples, but they too were families. Each person had a role and a service to bring to their usually small clan or mob, as do we in our so-called ‘civilized’ families. This allowed them to survive in this demanding and often harsh environment.

The fur kids I daresay would be nannies and hunters… Scotty dog is built to hunt small desert animals and would be ideal for the pack but Tup… she would not fare so well. Her coat, which is more fur than hair would kill her in the end no doubt, such has been her breeding as a poodle.

Yet still the dingo in the dawn and dusk howls, calling them, making them restless. Tup is less susceptible to the call, she is further away from the wilderness in her instincts but Scotty; he is restless. He wants to go out and play but he doesn’t understand that this, which calls to him is a summons into slavery. Only the dingo, he who calls, understands this. This is the nature of the beast that calls often to all of us. We keep our fur kids on a careful rein at the moment just in case they are tempted to answer that call.

They are not stupid, actually our pups can be amazingly resourceful. They know how to keep cool while we traipse around in the sun, in the heat of the day exploring. They instead wait patiently at the head of any path for us, enjoying the little full shade that there is. Together they will try to round us up at times, herding us towards the car when they feel we have played about enough. Or they will wait patiently at the Grampie Flat (caravan) door in expectation that we will all head in our little den together. Tuppi sees herself as matriarch and this is her place in the pack at times, particularly when I am distracted or occupied. This is her time to shine.

The most fascinating is when The Man and I go down different paths, the fur kids panic and work hard to bring us back together and unite their, or our little band once more. It reminds me of when children of all cultures began to break away to go their own ways. How the parents try to round them up and keep them safe within their own cultural boundaries as the fur kids try to keep us safe within our own little pack. It is like trying to contain water, which is running in its own path … there isn’t a great deal you can do without destroying what is a natural and often healthy progress. You can really only influence its path.

Yet still the dingo howls now to the golden sunrise. He will settle soon and we will be on our way soon enough. I know he will stay here. He still seeks to build his pack while the season promises the break into the wet summer months the time of breeding or of building the pack is on him. This is his life, his land and like all of us… he inevitably seeks the company of others with whom we will find a comfortable companionship. Our pups will stay safe with us.