We turned our headlights east this week to explore the Wheatbelt region of WA intending to once more reach into the Goldfields… bad move! It is bl**dy hot. It wasn’t this hot when we left the city of Perth, but in the following days a heat wave swept through the SW corner of Western Australia and the temperatures climbed into the mid 40’sC. We hadn’t planned on heading to the coast so soon but the pups had, and they made sure we knew just how hot they were.

The Man and I had a huge guilt trip in the building as Scotty moped around loyally staying with The Man, and Tuppi refused to leave the cool shade of the van and the fan. Having to step over that testy little ball of black wool who refused to be parted from the ‘cool spot’ directly under the ceiling fan, was a trial but I found myself wishing I could curl up with her there… how could I insist she move… poor little, hot ball of fluff that she is.

So instead we abandoned our plans to play in the Gold fields and made plans instead to escape to the coast. We had camped up inland at a Gnamma Hole at Oak Park, settling under the scrappy shade of a gum trees but with the deeper shade of an old shelter shed at hand to await the passing of the worst of the heat. It was a rural picnic area, which invited travellers to camp if needed and we appreciated the thoughtfulness of the townspeople.

It was not only shade this ancient Gnamma Hole offered us, but shelter as well as precious water. It had offered these things to the traveller for an eon in time… this is after all an ancient land. As I have mentioned many times, the western regional lands of Australia are some of the oldest lands still above sea water and this is a unique landscape. This land is largely flat, weathered, sandy and a golden-red edged grey with time. It has some magnificent area’s and features and many equally as treacherous.

Further north there are the ancient footsteps of dinosaurs to follow along a huge stretch of the coast, not to mention the thrombolites and stromatolites that have offered the first breath in our world. I have written about these things before. The golden ‘tears of the sun’ have wept into the earth here in the red sand of the deserts around Kalgoorlie, those that have bought magnificent wealth to the nation.

North of Perth, well into the Pilbara, they reap the ochres of the earth in iron ore. It is a mineral wealth that feeds the state and the nation.

A wealth we don’t commonly acknowledge though is that of water, fresh pure water without which we would never survive. Crisscrossing the SW corner of WA are water pipes, arteries, which carry their precious cargo to settlements and towns. The hungriest of these is the mining towns, where water is a valuable, though not always valued commodity and the story of the man who bought water to the Goldfields is an interesting one. These arteries follow roads, skirt vast fields through the Wheatbelt and travel high over the salt laden pans of the desert.

Salt lakes abound at the moment and experiencing them has been a special delight, the season is dry, as most of their rain down the south of the state falls in the winter months, though they get a spattering of rain in the growing season. Up north, it is the monsoons of the ‘Big Wet’ that bring the rains and they come over the summer. The only suitable arable land in all the south section of Western Aus’ is within the Wheatbelt about Perth, the remainder, the vast expanse that is 1/3 of the Australian continent, is largely dry and arid, too weathered over the ages of time to be fruitful or too dry. Or deep in the SW corner you will find the ancient forests in a kinder corner of the state. The problem everywhere though is water.

They have in part addressed this in the north with the magnificent Lake Argyle, a dam of immense proportions, which waters the north, the future food bowl of Asia… the Kimberley. But south of this the land is largely flat, sandy and suited to cattle such as with Anna Plains. Or it has been surrendered to become the great scars on the land left by irresponsible mining practices.

But we are camped up at the edge of a Gnamma Hole, this is where the land has weathered to the craton, or the bedrock of the continent. The rock-bed here sits proud above the sandy golden red soils, impervious to water and when it rains, the bedrock feeds the gnamma holes of the land where water is stored by the design of nature, instead of that of man. They are beautiful places, hard impervious stone and the scrappy Aussie bush that offers a hide for our bountiful bird life. These water holes make these places special for animals and birds alike and since the passing of the traditional tribes they have become particular sanctuaries for much wildlife.

The ancient traditional tribes used these places as special camps where water could be reliably found, where you could safely burn cooking fires without fear of setting light to you land in the fierce wild fires that can destroy when out of control, even today. They cared for these places, keeping them clear of debris and the water pure to drink… this care only happens now, rarely and mostly by rural folk. Or the duties are left to the soaking rains in the hope nature will clear the debris. Many holes have been fouled or filled, we no longer value them as we once did.

The rock-holes have been long abandoned as have the traditional lifestyles of an ancient people, but you can still find freecamps scattered amongst them. These camps are as old as the land and have been used for thousands of years by Australians. We clean and clear them when we can as the ancient folk once did; it is a proud Aussie tradition of thousands of years and we should all care for the land. It is the pipelines of liquid that now feed the towns and settlements and people grow careless of the old ways too often, neglecting their responsibilities to a land that nurtures and feeds them. 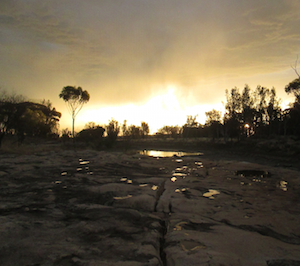 Before we broke camp the rains did come, the scattered over the edge of the Wheatbelt bringing relief to the heat and to see them nourish the ancient Gnamma Holes was magnificent. The pups had a ball frolicking in the rock pools left by the rain and in part I was sad to leave the inlands for the coast. But it’s the coast… its hot… and the coast is wet… what can I say.