While we are preparing to point our noses east across the ‘Nullabor’ once more, (colonial spelling here), having dawdled around the shores of the SW corner of Western Australia, there is a history here that has become more evident. It is an unexpected tale perhaps. We have all heard of Australia’s whaling history, where the giants of the sea were once harvested indiscriminately along our shores and particularly along the shores of the SW WA, while settlement and colonization crept across the land. The harvest that is believed to have begun around 1837 was huge and bountiful and it decimated the whale population leaving a lasting impression on places like Albany, Esperance and much of the south west coast in a vivid history. The industry lured the French and Yanks to our shores as their ships cargoed the convicts and then turned their interests to whales in season. On the return run back to their home port they took the bounty of our seas with them. This oceanic massacre however eventually led to the industries own demise as whale numbers declined steadily over the decades of indiscriminate hunting and killing.

Less spoken about is the hunt for a different bounty from the Great Southern Ocean. This is the herring and the salmon runs that happen each year and still bring a smaller bounty to the fisherman. Scattered all along the coastline of the SW and southern shores are some wonderful relics of history, the fisherman’s huts, or tin humpies which grace the dunes of many beaches still. These are usually perched on the shores, tucked into sheltered coves or sitting proud on the dunes overlooking the seas.

We began to notice these from the region of the Gascoyne, evidence of their presence sweeping down around the SW corner and on towards Esperance and they are a charming relic of the seasonal runs of salmon and herring and other fishing activities which required long weeks and months away from home and hearth. These huts were largely slapped together over time, made of tin mostly but they are often more substantial buildings. They were once the haunt of the professional fisherman but now largely have fallen to public use, or private hands and are generally held under leasehold and licence.

Some have fallen to public use, legal or illegally, such as those that can still be found at Boat Harbour, Bettys Beach and along the southern shores. The closer you get to Freemantle and Perth though, the more likely you are to find that they are still in private hands and are usually much loved and used for recreational outposts by their owners.

They are used as a much needed shelter, or scant short stop accommodation for the fishermen and commercial netters of the region as well as for holiday residences for family and friends. This particularly when the salmon season begins as from 15th Feb and the large schools begin their spawning season. Not particularly renowned for their meat, much of the salmon which is more herring than salmon, is used by commercial fishermen as bait I believe and for sports fishermen it is the fight that is the attraction. But still it is a season that stretches back into our colonial history and back further into a tribal bounty which was enjoyed by the First Australians well back into our pre-recorded history. 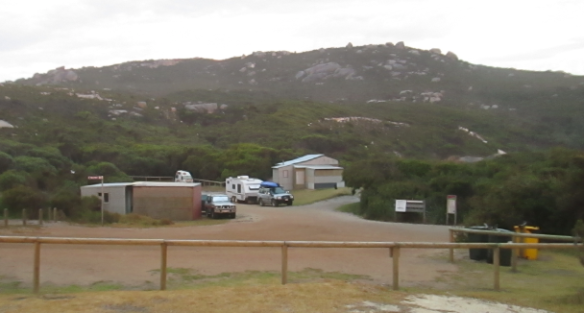 We found those tin shanties a wonderful curiosity like those at Bettys Beach. Some quite well appointed for shacks while others were little more than a cement slab with rusting tin walls. Their supports being of scrub timbers, their appeal found in access and shelter they offered overlooking pristine beaches.

Exploring the SW region has offered a lot of entertainment and Recreational Camping is a sound and delightful industry throughout the shores of the Great Southern Ocean. Some would call this freecamping, others call it ‘none of anyones business or concern’. What you chose to do with your free time and by way of recreation or lifestyle should not be governed by the opinion or purveyance of private and commercial sectors who are protecting purely their own cash flow. As is happening with too many caravan and holiday parks throughout Aus’ and WA in particular in their push to dissemble and eliminate freecamping and recreational camping sites for both locals and travellers alike.

One of the most delightful camps we came across was something of a local delight. We made our way into Boat Harbour, along ungazetted roads and sandy tracks as are so many of the 4×4 tracks along the still wild shores, to find a little known recreational camp… unless of course you were a local. The camp had a wonderful Camp Captain, Trev’ who was worth his sea-salt in gold and who cared lovingly for the extensive camp site with little recompense, but a great deal of appreciation and personal care and concern.

Sitting high on the sand hills nearby was one of those delightful fishermen’s huts, which had been converted to public use with considerable foresight. Places like this should be heritage listed and preserved for the public to freely enjoy. People like the Camp Captain, Trev’, should be accorded every respect and it is good to see that the local Rangers are of this opinion too.

Some people might even call him a squatter, and we have stumbled across many squatters in our travels, tucked into remote area’s and secluded camps. Many who have chosen the life or are escaping a world grown too difficult to survive in. Or those who have lived this life as their parents did, though now without the traditional tenets incumbent in the old tribal world of an ancient race, such as with the Australian bush Aborigine. Many from these groups should be moved on when they offer particular challenges for our Bushrangers and public safety in general, as well as personal welfare. If you don’t care for the land, then you have no right to the land regardless of your creed, race or personal outlook. But treasures such as Trev’ and others who truly care for the welfare of others and the health of the land they occupy are a very different brand of person or group. These special Aussie souls should be left in peace to do what they do best.

It is whispered that many of the rec’ camps along the southern shores of the Great Southern Ocean, particularly those in the Denmark, Albany, Jerrumungup and Ravensthorpe shires, those that run along the coastal shores of the SW region, will come under the control of the Shire Councils and their freecamp status will change. It is perhaps an inevitable thing but it should be balanced with the public need for rec’ camps and public safety. I would hate to see this region gain the same unfriendly reputation as Esperance has for the recreational camper and freecamping life-styler who finds little to attract them in a towns caravan parks.

As expressed by one local, “We will always find a free spot to camp of the weekend”. So perhaps, if the shires don’t wish to see the total decimation of a wilderness shoreline which attract so many, it needs to also balance commercial interests with its duty as a regional protectorate body and leave camps like ‘Trev’s’ world’ and others as on the Pallinup Priver alone for the public to freely enjoy, and if anything offer them support rather than commercial change.