The Nullabor, the name has always irritated me because it is such an enigma to what you actually find. The vast ancient region was named in August 1865, while an explorer was travelling from the east across the Hampton Tablelands, along the most arid of sections. E. A. Delisser in his journal named both the Nullabor and Eucla. This was how the largest limestone karst in the world received its European name. Its meaning is found in the Latin Nullus Arbor (It seems Delisser spelt it Aus’ style) the meaning is however ‘No trees/plants’. This is simple a misconception as the vast region is most certainly not treeless.

To the tribal aboriginal people, the vast plain was known as the Oondiri, meaning a waterless plain, as surface water is not easily found across the ancient karst of limestone. This limestone karst is the largest in the world. It was formed 40 million years ago when the Australian continent broke away from Antarctica and it is also very unstable.

Water on the Oondiri is still a biggie but it can be found. This was knowledge often sacred to the tribal people and was closely related to their Lore allowing them to regulate access and ensure survival for both the tribal groups and the wildlife. Australian Aboriginal tribes sparsely populated the region in times when the climate allowed them to hunt.

They learnt to adapt to the demanding country. They learnt where the cool recesses of the land were, and they painstakingly learnt how to find water. However many of their water resources are now ill-kept or silted up, such as many of the rock holes and it has been decades if not a century since they were attended to under tribal Lore. There are however other impervious rock beds emerging from the craton, which still provide water for stock as well as a scenic camp for travellers.

The Mirning and the Ngadu people among other tribes were known to have inhabited the region on and off for at least 18,000 yrs. This was before the American Indian moved onto the vast plains of the North West of the North American continent. The first acknowledged contact with the colonists was in 1866. Even though John Eyre crossed through the region in 1841 he kept mostly to himself. It was however an Aboriginal woman who showed him how to find water shoreline soaks, unwillingly.

There is evidence that sailors visited or found themselves shipwrecked in the region well before this but these facts have yet to be accounted in our sketchy ‘English’ version of our Australian history. On the ancient plain can be found a stone engraving that is believed to be ancient Libyan script. This has been translated by a leading epigrapher and dated during the reign of Ptolemy (2-3rd cent. BC). This is clear evidence of Ptolemaic explorers some 13 klm inland from the coast. While our national history continues to ignore such evidence in favour of English maritime history, the truth about Australia’s long history in the European and Asian context will remain hidden from most Aussies.

You can read about John Eyre’s journey in his journal however, which is freely available at the Gutenberg archives. That exploration was a full 150 years ago and now there is a struggling remnant of these ancient people, though their descendants still venture into their ancient estates to this day it is more nostalgia that draws them, as much of their ancient Lore that governed their migrations and hunting has been lost.

Finding water was a treasured knowledge often jealously guarded as the whitefella would bring his cattle and livestock and often pollute and abuse this precious and often unstable supply. Now the people of the Nullabor are more conscious of this liquid gold. They too treasure its supply and share it with others, as while it is more plentiful it is still very precious.

Most obvious sources of water are the rock holes of the vast granite craton, where the hard bedrock surfaces above the fine sandy dust of the plain. Here birds, insects and a myriad of animals find liquid gold, that which sustains their life at places such as the rock holes like Newman Rock and others.

The Oondiri is a large limestone karst mostly devoid of surface water. Beneath the surface, where any water readily escapes too, lay vast aquifers. These often are not easily reached and are extremely dangerous to explore. Some caverns or caves of the Nullabor harbour vast lakes while most are dry or much of the water in them can be found to be saline. Rarely you can find a fine layer of freshwater sitting atop a saline layer. This is rain water which makes its way down from the surface and due to conditions will float above the denser salt level.

The caves of the Nullabor are a jealously guarded secret. They are dangerous places and the 2011 movie ‘Sanctum’ was based on an incident, which claimed the lives of men not so long ago. As tourism in the region grows and the caves come under the protectorate of the National Parks (in WA this happens on the 1st July 2015) these wonders of the Nullabor will become more widely known. Public pressure will no doubt make the safer of these caves more easily accessible but that is another post as we are still exploring these vast caverns and sacred places across the Oondiri.

There is a wonderful display, freely open to the public at the Balladonia Road House, which explores the history of the Nullabor and I couldn’t recommend more highly that you take the time to visit the small free museum. Stop, have a cuppa and a rest, perhaps even stay the night while you fill up with fuel. It is well worth the time. Find out about ‘Sky Lab’ where the Yanks littered the outback and learn about the wonderful Afghan cameleers. Visit Afghan Rock at the western edge of the Nullarbor and envisage the cameleers at rest, those who helped in the growth and development of this truly vast and wild land.

Telephone links on the Nullabor have vastly improved also since we first ventured across the great plain. The telco Telstra still holds something of a monopoly but I was amazed at the times we could achieve links well within rage of most of the settlements, out posts and Road Houses. The changes and developments in the adventure in crossing the Nullabor have made it more accessible to many. It is still a vast distance though at near 1,500 klm even if the road is exceptional for a desert highway.

Along the way we found many roadside stops and freecamps as well as the Road Houses, which all offer accommodations in various forms. The caravan parks are usually reasonably priced for the caravaner and a great place to clear the dust from the van especially if you’ve been driving off down those inviting desert tracks. The cheapest petrol is well known to be available at Mundrabilla Roadhouse on the Roe Plain and the most comfortable of caravan parks has to be a toss up between Eucla and the Madura Pass Roadhouses. I wouldn’t recommend you try for access to the beaches on the Roe Plain though, unless you have a 4×4 and the ‘guy’s  in grey’ are pretty plentiful, even the locals are wary of their presence. The fishing is good at times though and there is a fishing industry in the bite where cray’s can be found to buy often.

All up it remains a great adventure, one of the great Aussie iconic trips. The first time you cross the Nullabor it is simply magical and there is no better view than the Bunda Cliffs found between Eucla and The Nullarbor Roadhouse… well maybe there are views equal to that but it is an unforgettable experience.

I wrote about the wonder of crossing the Nullabor for the first time in a travelogue called ‘Crossing the Nullabor’ the e-book available for the cost of a cuppa, and it is still a magical trip. Each time, for us, it brings new wonders to discover and even greater adventures.

It is a trip every Aussie simply should experience in understanding their Land. To follow further postings on this adventure, click the “follow” button as I post weekly on our discoveries around Aus’. We’re still deep in our Oondiri adventure and there is much more to come. 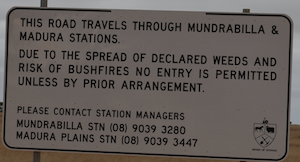 Ps… If you intend leaving the highway then please make the effort to contact the property holder and/or manager, for safety and curtesy. If your going to be ratting around someones back yard it is the very least you can do.