There is nothing quite like the dawn as it sweeps through the forest in the early break of day. These are the things that I love about camping in the forestry. The forests are a place of mystery for me, a place of quite contemplation where you can sit with the giants of the land. Here in Victoria it is a wonderful place to enjoy the forests. Having recently been in the west coast forests of the US where the trees are mostly pine, I can truly appreciate the diversity of Aussie forests. It is coming on winter here… autumn has settled and the beautiful gums are shedding their coats of bark, littering the forest floor. The colours are breathtaking.

We are camped up in the Firth Forest north of Melbourne and have the company of a few other campers to break the morning quiet. The cry of a hungry child looking for breakfast, the crack of wood being split beneath the strike of an axe and the occasional shot from a night hunter chasing wild pig, will break the quiet of dawn. But also there is the song of the birds, the harsh call of the cockatoo and the sweet twitter of smaller flighted friends. This is the world that I love and it’s a precious thing.

Meeting up with a hard working DEPI fixer on his rounds was an added delight. When we enquired after the current fire restrictions, always a good thing to do, we got to chatting. In Victoria the forests truly belong to the people here and you are encouraged to use them. Camping throughout the many forest reserves is permitted and free for up to 4 months. This privilege can be coupled with fossicking, gold prospecting and many other activities you might like to pursue. You do need to be self contained and conscious of the creatures of the forest, it is after all their world and it is expected that you will do everything you can to preserve this wilderness. Take a trowel… dig a small hole for you toilet and bury the thing!  This is not hard to remember if you plan to go bushwalking.

Those little white flags you find scattered along the forest paths are nothing short of disrespectful and disturbing. How I hate to find evidence in the careless lack of thought from other users of this beautiful country. Think before you crap … would you like someone to leave this sight in your front yard? Dig a hole with a stick for goodness sake if you forgot to bring a trowel… how can you remember the loo paper and forget the trowel?. Did you seriously think there would be toilets at every bend in the bush.. or did you not think at all?

Here in the Firth Forest, part of the Wombat Forest Reserve, there are horse corals and a delightful and basic camp area has been set aside with toilets and picnic tables. This forest has been logged before, many times no doubt and still it gives up its bounty to a resource hungry world. Logging activities are managed now and the scars on the hills where they have stripped the earth bare can still be seen in cycle. But at least here are still some giants, those that remain and are carefully guarded and there are others that grow slowly, hopefully they are careful future contenders for the title of old growth.

The remnant of an old logging mill is nearby, its jinker tracks still carving clear paths through the forest. They were paths for barrows or jinkers for hauling logs once drawn through the forests by ponies and bullocks. The 4×4 wheelers now use these trails, mountaineer bikes, bushwalkers and campers alike. Fire has swept through here many times and the spindly growth of tall gums, which crowds the forest floor, is testament to this. 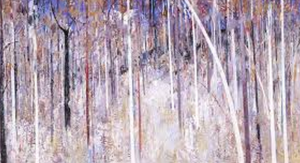 None the less the view we have of the forests is a magnificent sight that has been captured in paintings found even in the halls of Parliament House. It is a magnificent reminder to the powers that be of what is truly of value. I wonder if they stop and wonder at such a grand sight as they step their way through these houses of power. Do they think of the Australians camped up in the forests, greeting the cool autumn mornings and enjoying the blessings of this land. I hope so, for these things are truly precious things they need to ensure a future for.

Governors from Melbourne once sought this peace of the forest and this reserve once housed such a retreat before the building of Canberra. Remnant is the old historic plantation where the house once stood in Firth Forest. A special reserve now, you can wander through the stand of aged trees planted after the English fashion, now found deep in the Aussie bush.

The forests hold many a secret and in their vastness they guard these from the world. Last year we explored the world around Newnes in NSW and discovered an old and abandoned place that was a testament to the follies of man. As we toured through the forests of the SW corner of Western Australia recently we also discovered other secrets. Colonial huts, the abode of timber getters and prospectors of long ago, these left to the forest to guard now. They were well aside from the highways and byways, only rarely stumbled upon by the bushwalker and bikers as they reached the hidden places looking for thrills. They leave these things generally, not sure who is home, not sure who has a gun.

More on our radar then was the old fishing shanties of the coastal region of WA, another icon in time servicing an industry still. That of seasonal fisher-folk seeking the salmon and herring runs, bounties of the seas. But it is the forests that draw us now, before the deep chill of winter blankets them. We will be soon heading north but until then we will draw our breath in the beautiful forests for a time so that we may take the precious memories of cool evening and mornings with us.

Good News = Victoria has now axed the basic camping fees for National Parks as from Easter 2015. What a sensible lot some people are.

To discover more about travelling Aus’ visit ‘Oldies at Large’ for a listing of tales.

2 thoughts on “Camping Amongst the Giants – Victoria’s Forests”