We are going to go beyond the dogma of an English colony, that of a penal settlement in Sydney Cove 1788 which was a colony of men and women enslaved by a military and social ‘upper’ class who commonly saw themselves beyond the law. I want you to step with me into a strange new world. It is not Terra Nullius as the English insisted, it is a healthy and thriving culture that had travelled a vast landscape for tens of thousands of years. This is a time before the English arrived. 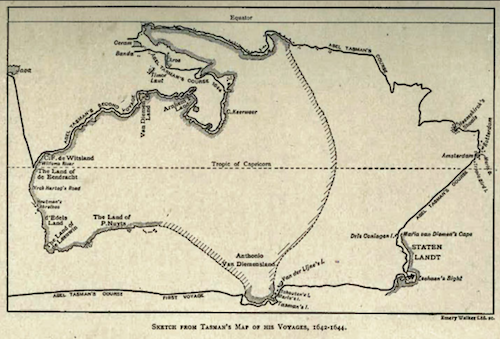 So what did we know of the Australian continent then? Firstly a great deal was known, Cook after all followed nautical maps, some which even mapped the Eastern coastline 150 years before he navigated the Coral Sea, charting this coastline perhaps more accurately. But he wasn’t the only one. Dirk Hartog had already accurately mapped most of the continent as can be seen in earlier maps by Hartog, and also Tasman. However there is still earlier evidence of a global knowledge of the Great Southern Continent. A 400 year old map dating it to the 1500’s and is in existence and it clearly shows the eastern coastline of Aus, the Great Dividing Range and even the ancient evidence of the Macdonnell Ranges in central Australia, other wise known as the ‘Caterpilla Ranges’ by the people who lived there.

It is estimated that there were 350,000 to 1 million people living here (about as many as identify as Aboriginal today), most centred around the River Murray and along the eastern seaboard. No wonder the world thought it was terra nullius … no one had seen much of the inhabitants due to the Great Barrier Reef. Forgivable? … I think not. The propaganda machine has been going on long enough to make such general misinformation unforgivable.

The population had many different, though often related languages, in excess of 250 and probably many more, as language was and is evolving all the time. These Australians of pre-European history had no sense of a comprehensive nationhood. They were largely family groups and clans with a strict sense of Lore, not necessarily according to the European sense of Law or Lore. However it worked for a collective culture, and it worked very well. There was definitely room for improvement though, this in the status of women and remodelling the marriage Lores which were designed to advantage the “Elder” men. A common complaint of the younger warriors.

More importantly the world knew of this culture, only the English refused to acknowledge it. Trade between our early Australians and Asia had been going on for many centuries and it was a trade that was abolished with the enforcement of English law, customs and the want to control a nations resources, wether this be good or bad. It was particularly bad for the people who had traditionally traded for many, many generations from our vast northern shores. It should be acknowledged here that international trade had been going on for a long time… trade in sea-goods, tools, culture and often women, as well as men who were commonly bonded into sea-faring willingly or otherwise.

Trade routes across the Australian continent had also been established over thousands of years unlike the Silk Road, which is only about 2,500 yrs old, or as old as the developing centres of trade and civilization. These trade practices of tribal Australia had been likely going on for longer than those of the Euro-Asian version. ‘Songlines’, or Australian tribal trade routes were developed by necessity and spread the common elements of ceremony and Lore. They developed to negotiate the protocols of trade, not in silk but in technology, weaponry and articles for ceremony as well as facilitating marriage. The distances traversed were about the same between the Songlines and the Silk Road.

Australian cultural history however goes back much further than European or Asian written or recorded history. This can be found in the cultural records painted and engraved in rocks of a culture that has existed for many millennia. Record of sailors and explorers on our continent can be found also even in remote regions such as if found on the Nullabor, or Oondiri Plain.

High on the Hampton escarpment, which separate the Roe Plain from the Hampton, not far from the tar track, is a rock that is engraved with the inscription dated from the 2nd century. It is from a seafarer who perhaps was shipwrecked and it says “An Exploration ship, the Steadfast, returning from Cattigara. Fortune favours the godly, but shipwreck is avoided by diligence”

The inscription has been identified as ancient Libyan script from the reign of Ptolomey (2nd century BC) a period of far-reaching maritime activity in Pacific waters.

Many strange and wondrous records of maritime visitors and explorers have been found on Australian shores but they are rarely announced. They also never make our general knowledge … such is the preoccupation with English history and we are all the more poorer as a Nation for this.

It is time for change. We owe this not only to our indigenous people, but to our children.

Jan is an author and writer, you can find out more about her Aboriginally themed novels under the tab The Dreaming.