Tassie is a gem for the free camper and economic traveller, this as long as you are self-sufficient and this includes a grey water capture system. Irresponsible campers are mostly not welcome in the sensitive World Heritage area’s and National Parks & reserves due to the wild life and their need for clean water and an unpolluted environment. However fortunately some National Parks provide toilet facilities and this helps preserve the pristine nature of the environment, it also accommodates campers and those without the essential catchment systems.

What we enjoyed most about camping in the central plateau reserves, including those in the Tarkine and elsewhere around the lakes, and within the boundaries of the National Parks, is the ready access to these very lakes. They are simply stunning in many respects. They are also the foundation for the Tasmanian Hydro Scheme, which not only generates more electricity than the Mainland Snowy scheme but allows Tassie to sell electricity across the Strait to the Mainland. Though there are some that say they would prefer cheaper power bills for sure.

Tassie is a mountainous Island where near 50% of the island is a reserve or National Park and this makes for a lot of lakes given the States want to dam so many gorges in the past. That they rely on hydro-electricity has bolstered the number of their lakes and generally you can camp up near the boat ramps, or in area’s set aside just for the holiday maker, or traveller.

The locals enjoy these reserves as much as the traveller does and why they are generally with minimal facilities, if any. They are places of unique beauty and some great sport in boating, fishing and other activities. The Central Highlands is a world renown region for trout fishing and it is a reputation well deserved. It is also a region of extreme temperatures, known to deliver snow falls even in December.

The magnificent Franklin and Gordon Wild Rivers National Park, and the Central Plateau Conservation Area, taking in the Cradle Mountain and Lake Snt Clair National Parks are part of this Central Plateau and Steppes, and in general difficult to access. This is aside from the tourist access provided by the National Parks to the most popular attractions, such as Cradle Mountain. Roads, and even tracks are few and far between. Most access is via the rivers, or on foot for the walker and overland trekking tourist. This area takes in the magnificent wild rivers flowing on down into the remote SW corner of Tas. These rivers in the SW corner are thankfully untamed and undammed  and they are a World Heritage treasure, one of the few that qualify with 8 out of the 10 criteria for this preservation listing. They are magnificent and Lake Pedder and Lake Gordon are on of the few access points which offer an insight into this still wild central region, with the Gordon River Road taking you deep into the South West National Park wilderness.

Opening up the Wild River Region. 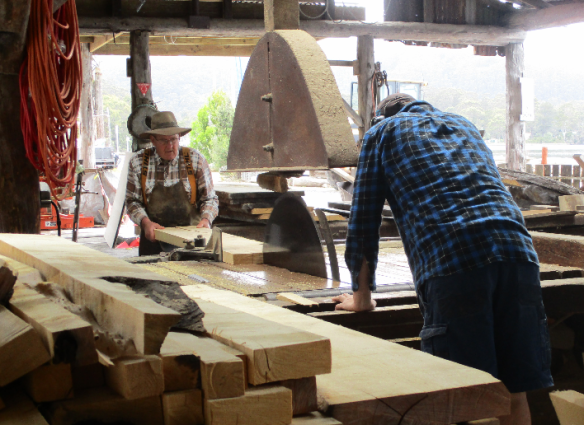 It was the Axemen of the convict era that discovered the beauty of the region. They travelled upstream along the many wild rivers on the west coast, in search of the Huon pine, which was so greatly valued and unique to Tasmania. It was also the descendants of these mountain and river men who fought for the protection of the region and the preservation of its many delights, such as the Wilderness and Heritage rack and pinion Rail line between Queenstown and Strahan in the remote west coast region.

It was the convicts of the brutal Sarah Island penal outpost, who were the first boat builders in the region. They utilized the beautiful Huon pine they labored to harvest under inhumane conditions, logging the precious timber from the rivers edge. In the freezing waters, often in the teeth of the roaring 40’s they milled, shapped and built many of the early crafts for Hobart during the 11 short years that Sarah Island served as a much dreaded penal outpost.

Tales of cannibalism, murder and brutality were a reality of Sarah Island, under the brutal command of the commandant… that was until the mongrel drowned. Then the story becomes one of success, of a labour often loved and valued by the convicts. A tale of regret when they established Port Arthur penal outpost near Hobart and moved the convict there, finding Sarah Island too far and too expensive to provision.

If you get into Strahan, make sure you visit the pantomime “The Ship That Never Was”, showing nightly during the tourist season from Sept-May, near the Information Centre at the harbourside. It is hilariously entertaining and has run for some 23 years. I show definitely worth seeing which tells something of the tale of Sarah Island.

If you want to delve into the World Heritage Wilderness region there is no better place to start than at Strahan. Its difficult to choose between the harbour cruises or the heritage train but then… if you can venture on both you certainly wont regret it.

The trip through the Macquarie harbour entrance of Hells Gate is something you wont forget in a hurry either. The entrance to the magnificent harbour is incredibly tight and for the big tourist cats’ it is complicated by the wild weather often felt on the south coast wilderness. Strahan is a great place to ‘feet up’ for a few days and enjoy the unique wilderness town and all she has to offer. I can personally recommend the scallop pies from the bakery at the harbour and a visit to the Huon pine mill is something you wont forget either… the scent is simply heavenly.

Read Tales of Adventure across Australia in

Discovering Australia and Her Lore

To follow our journey throughout Tasmania over the next few months, you can choose the “follow” button on the right side of the Home Page and subscribe to any new blog postings on Jan’s site.

3 thoughts on “Camping Through the Central High Plateau of Tasmania”