Spirits of the Rock 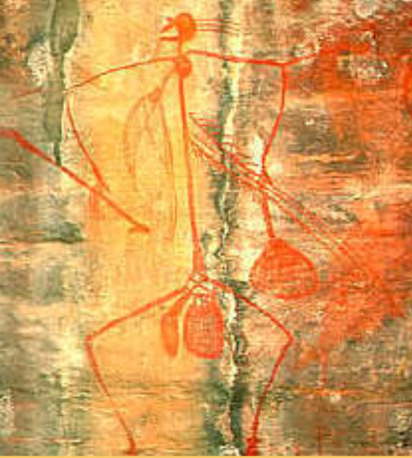 Learning about, and interpreting the Ancient Lore and Legend of Aboriginal Australia is an aspect of my writing that I have studied for most of my life. One of these fascinating avenues of Australian Lore is that of the Mimi people. That mystic and secretive Lore of a people who lived once amongst us and who still, today, drift through the stories told and the experiences of Australian Lore.

The legend of the Mimi people is tied securely to the Lore of the Wandjina and tales of the Mimi can be found largely in our northern regions of Aus’. The Wandjina is a Creator being who is endemic in Northern lands and such places in Australia, most linked now to the Kimberley. Though it is a Lore that stretches across the Top End, it is mostly in the North West of our continent that you will find the ancient cave paintings of the secretive and sensitive Wandjina figures, those who bought knowledge, wisdom and Lore to an ancient tribal people.

The legends of the Mimi stretch a bit further, out into the lands that rim the NW corner, almost as they too, in time, stretched out into other bordering area’s. I first found the ancient paintings of the Mimi on the rocks high on the Kakadu Plateau many years ago now and even then I wondered at the strange story they told in their stick thin figures and the manner of they way they were suspended on the rock paintings.

The Wandjina are a legend from the heavens and the tales of the Wandjina tells you, like the Mimi Lore, that having imparted their Lore and knowledge to the people of the land, they then became as one with the rocks. Originally the Wandjina came from the skies and this was where they returned to, leaving the marks of their spirit in the Rocks and sacred places as reminders to the people of the tribes.
If you consider the stories of the Mimi, and that of the Wandjina, it soon becomes evident that they are similar and indeed, as the descendants, a people of the Wandina, the Mimi are creatures of this Lore who are tied intrinsically to their land or to the rocks. 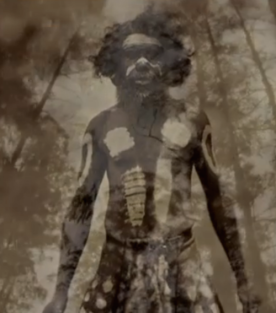 I find, like the ancient people of many religions, beliefs and legend, that in talking of this ancient Australian Lore, the best way to impart knowledge is to thread the Lore throughout stories. Throughout the world such stories can be found in such places as ancient texts, translated now into the Biblical canon, or the Quran and so on, as well as stories told in art painted over rock, canvas and on wood. The ancient Australians told their stories by word and dance, they had no recordable medium other than stories told around the camp, or that drawn or etched into rock or depicted on bark or stone with pigment. The only scripts they wrote were pictorial, on message sticks and those things designed to travel. This also took the form of ‘story lines’ or ‘song lines’ which were carried in memory and Lore, guiding you through the land and beyond. Books or texts were not part of they culture as seen and interpreted in what is understood as a ‘civilised’ understanding of writing. A pattern painted on a shield, yidaka or even the body has a meaning and to the user or wearer would convey a story or be evidence of an intent, often raising the recollect of an important memory. Traditionally it was rarely simply a decoration.

I have explored Australian Lore whenever I have the opportunity and the interpretive links between the ancient Mimi and the Wandjina are recounted in the 3rd book of this fictional series “The Dreaming”, Spirits of the Rock. It is in this book that the primary characters venture into the world of the Mimi, discovering many of the secrets revealed in ancient stories and tales, those spoken around campfires down through the ages and later recorded by anthropologists or storytellers. In my books the essence of these tales are woven now around words on the page. There is much to discover… and yet much remains hidden still. There remains secrets of the Lands governed by the creatures of the spirit or souls and shadows of this land.

In the story of the 3rd book here is an excerpt of Jenna’s as she describes in the story of the Spirits of the Rocks:  “The Mimi were part of the stories of my father’s people and Granny had spoken of them rarely because so little was known of them, they were thought to now be wholly part of the Dreaming, wholly one with the Spirit creatures. A place they had chosen for themselves in the existence of their world. Not able to exist well in our world they no longer held the ability to live as we do, their bodies no longer able to sustain the demands of our world and so they had moved towards the Spirit world of the Dreaming. They were becoming creatures of the Spirit and it was a choice they had made to survive. This was all we really knew about them from the old stories.

That they ventured into our world was testament to those who held ancient blood links with the Mimi. Like my father had and like the links which Ngaire’s husband had also held. These were the Mimi people we knew but was there something else about these people that we didn’t know? Something which was an ancient secret which Ngaire went in fear of?” 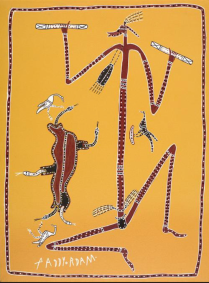 In the book Jenna and Ngaire go on to discover the world of the Mimi through their hereditary links to the Mimi people. It is a world that both Sean and Andrew, their men, are also discovering as they peel back the presence of their Lore in their own world, in the manner of Men. Together they will explore with you and interpretation of an ancient world. In interpreting the tales of this ancient Lore, such as that of the old tribal Aboriginal people, I have attempted to bring such tales into a contemporary world and to view the legends as they would be found in our world.

This third book of The Dreaming series, explores the world of the Mimi and brings to the reader aspects of these tales to consider in a new light. Like each of the four books of the series you will be introduced to contemporary stores of Lore, and it is hoped that you will enjoy exploring these as much as I have, and as much as I continue to do. Each book is a story in its own right but the series will introduce you to the many aspects of this ancient and still revered Lore. The Lore of the oldest continual culture which still survives in our world.

You can read more about this mystic tribe in a past posting, The Mimi, people of the spirit lands of Australian Lore.

Discover the tales born of Australian Aboriginal Lore in a page dedicated to The Dreaming Series… enjoy.

You can choose the follow button on the right side of the Home Page and subscribe to any new blog postings on Jans site.