Serpents have starred in religion since Adam and Eve… which is relatively recent. Before that they also starred in the Dreamtime and predominantly in ancient Lore around the globe, being involved in the creation and the evolution of mankind. In Australia, which has some of the most ancient lands still above the tide, serpents hold a special place in Lore… and they are commonly known as the Rainbow Serpents.

The term ‘Rainbow Serpent’ is not an aboriginal term, but a generalisation that was coined by A. Radcliffe-Brown to describe the ancient art depicting serpents, to be found in rock art fashioned after the last great ice-age in Australia, some 12,000-6,000 yrs ago. Much of the art has undoubtably been lost with the rising of water and the want for man to dwell along the shores of the land, however it can still be found in pockets in the outback and ancient places of ceremony.

Serpent Lore stretches back into the Dreamtime and beyond the ancient tales of Western Religions, mostly in the creation of man and our world. Serpents are also found in most Eastern Religions as in the tribal Lores to be found across the continent of Australia.  Most all religions have a common thread being that of the serpent, or creation being who fashioned Lore. This is in itself remarkable and often overlooked for what this repeated feature of Lore is.

Serpents were, and are now the guardians of regions, and geographical features. The creators of great river systems and the teachers of Lore. As with the bible Stories, serpents bought knowledge to mankind, they bought freedoms and also, as with the bible stories… they bought our most ancient tales and Lore. Even the practice of medicine where you can find depictions of the ‘Rod of Asclepius’ you can find the serpent who brings to the practice the symbol consistent with trade, eloquence, negotiation, alchemy and above all, wisdom.

Across Australian, within Aboriginal Lore and Dreamtime stories, the serpents are found. They are known by many names, as many names as there are languages and dialects, and the stories of their deeds are also as many, but predominantly they are creation stories or tales where man is gifted Lore and knowledge. These primary beings demand respect, adherence to Lore and offer retribution or punishment to those who flaunt their Lore, even in the more modern religions.

In the more westernised religions, the serpents are buried behind more acceptable images and representatives of the Lore or religion. But they remain still at the core of the religion, after all what would a Primary or Creator God be, without the Serpent or the Devil. Even if they are now depicted as the ‘core of evil’ instead of the ‘core of knowledge’. But perhaps, as many if not most religions uphold… they are one. They are different sides to the same coin as heaven is the opposition to hell, yet they are created on the same plane or within the same world of experience or existence. What is right, just or godly simply cannot exist without the knowledge of what is wrong, unjust or evil.

My lifelong interest in Serpents stretches back into my childhood imagination… a want to understand those early stories told within the pages of a childs religions book, or to be found in the strange art found within caves and rock shelters… art etched by timeless hands while tales were told of Dreamtime creatures who bought with them the ancient knowledge of Lore.

This is why the Serpents have a place and presence in my stories of ‘The Dreamtime Series’ and the ‘Spirit Children’. Serpents are there… they have not been lost to the world, we just chose to not see them as they chose not to be seen. I have created a world within my stories that is one shared by the Dreamtime creatures, a world that is ours as well as theirs, and it will have you understand that they are still here.

You can sit quietly above the blow holes on the Nullarbor and hear their movement and whispers within the limestone karst still, or perch carefully on an ancient rock ledge and hear the whisper on the wind roaring down the gorge. They rest quietly in ancient places, as we are told God lives high in the grand ceiling arch of a temple or cathedral… or that the devil sits dormant in the mind of man.

Perhaps the different is… we know that the Serpents or these ancient snakes once lived in our world or within our dimension, as well as their own, as we have their bones preserved in the rocks of time. 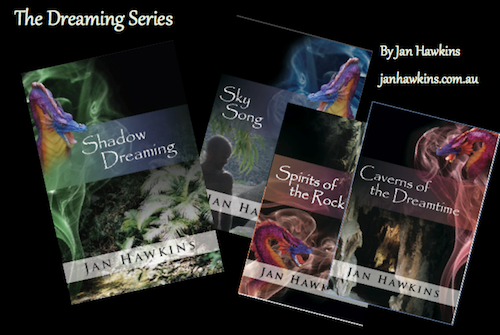