One of Sydneys magnificent bush reserves can be found just North of the city centre. A favourite haunt for Sydney-siders has always been this beautiful National Park. It nestles quietly on the coast between the Hawkesbury and Port Jackson, in its own brand of splendour. Often the most visitors to Sydney see of the park is the unforgettable sandstone cuttings which herald your northern approach into Sydney. These are for me the gateway to the sprawling city, found along the M1, but there is so much more than this to see.

What you can do: 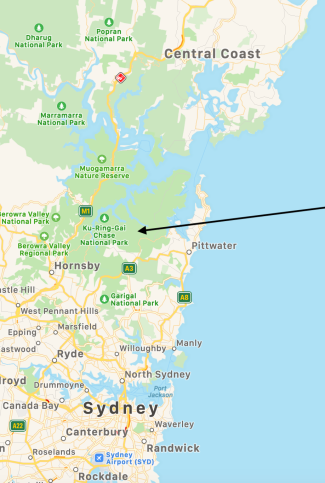 Once the home to the Guringai people, there are more than 800 recorded aboriginal sites within the park to be found. From rock engravings, drawings, paintings, middens and historic shelters. Here the old people fished, worked, played and lived along the meandering water-ways for tens of thousands of years, through ice ages and bush fires. The most recent age of ice being only 10-12,000 years ago, when the eastern shoreline had receded some 25klm out into the ocean, turning the Great Hawkesbury River into a deep forested ravine, inhabited by people of the forests and mountains, rather than those born to the river or salt-water.

With the arrival of the convicts into Port Jackson, those taken from their homelands as youths and guilty mostly of ‘crimes of poverty’, the decimation of the native tribes had begun within two short years. People died in their hundreds, wiping out whole tribal populations by smallpox and other diseases born of European and Asian cities. They were never again to see the tribal populations of the region return in such numbers… a world known for tens of thousands of years had passed into history. 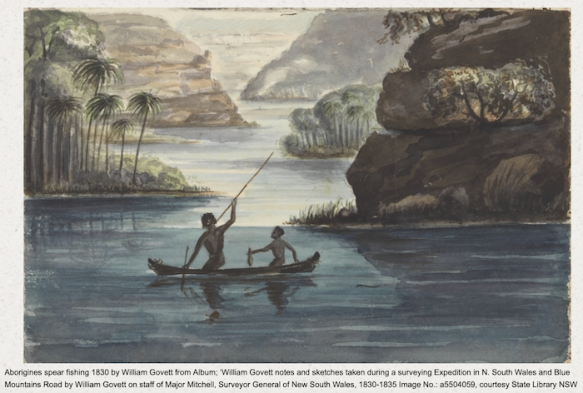 By 1840 most of the Aboriginal people had disappeared from Pittwater, though a few stayed to became well known local identities. The much respected Bungaree, recognised as King of the Broken Bay Tribe by Governor Macquarie in 1815, was given a land-grant of the peninsular at Georges Head, farming implements and a precious boat. He, and his clan became a familiar sight around Sydney Town. He was also accorded ‘convict instructors/labourers’ to assist him and his clan in working the land. However the venture failed, the tribe not taking to the European methods of farming and cultivating the land. They were more successful with the gift of a fishing boat and nets to use in a manner more in keeping with their traditional practices. 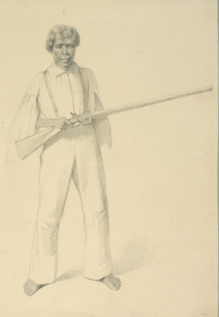 Bowen, Bungaree’s son, also went on to become very much part of the Pittwater people. The region of the Hawkesbury was a place sparcely populated by convict escapee’s and native families. The settlers holding land grants found the going difficult and between 1793-1805 a state of ‘open conflict’ existed between the natives, bushrangers, convict families and settlers. The problem being that settlers took up the river banks with their land grants. These places were once the primary source of food for the Dharruk tribal people and it robbed them, and other colonial bushmen/women of their traditional resources.  A bitter conflict developed between the groups which was to become something of a ‘colonial war’. Displaced tribal people and the families of convict escapee’s and squatters were forced to settle further downstream and in Pittwater.

Kr-ring-gai Chase NP still though, has the old feel of yesteryear and you can feel the spirit of the land, that left by adversity, struggle and a certain contentment and success in that it still, to this day, holds to its heart the spirit of the people.  From lawless days of bush-ranging, rum smuggling and piracy, along with cultural conflicts, Pittwater and the Hawkesbury River, has emerged as a wonderful playground. There are some wonderful stories to be discovered along the greater Hawkesbury, the least of which is the stories of the Ku-ring-gai Chase National Park, gazetted in 1894, preserving a rich and beautiful history for an emerging Nation as well as a magnificent flora and fauna reserve, a real gem of a place to visit and explore.