Having just experienced the tropic savannah wilderness of Litchfield NP in the Top End, I find myself sitting on the edge of the ocean, to the roll of the endless waves against a sandy beach. We set the swag up last night, just north of Darwin, to watch the lights of the city and those of Casuarina from a beautiful spot called Gunn Point.

It is before the dawn here… the stars are brilliant in the sky but what woke me was the sound of drums. Not at all what one expects to hear while camped on the beachside. It reminded me of the sort of ‘man cave’ stuff that you read about. You see Darwin is very much a man’s town. The Army, Navy and Airforce have a very large presence in the Top End around Darwin, more than you would ever believe and I understand that there is, or will be a large contingent of US forces based here out of Darwin as well. Those drums… well that was perhaps a ‘back to basics’ sort of thing that men being men… or boys… indulge in. Seriously guys… who plays drums to a meta beat at 4am! 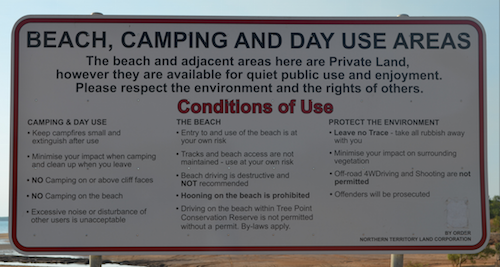 Anyways… it all brings to mind the joys of camping. Camping for me is one of our greatest pleasures and I do not mean being set up in a caravan park somewhere… I mean the Aussie traditional camping experience… that which Aussies have been enjoying since time immemorial be it in front of a camp fire with the didgeridoo playing and the clap sticks holding or a beat to a gleeful laugh, or around the same camp fire with a banjo, camp chair, listening to a round of ‘Waltzing Matilda’ or even a bit of old fashioned, ribald camp poetry from the convict era, while camped out in the bush or beach. We are enjoying the freedom that we have the privilege to enjoy in Aus’ due to our vast stretches of wilderness and bush.

Some of the tales you can hear around the campfire… be they your own, or that of those camped up nearby, can be a heap of fun. Even listening to the antics of kids… the beautiful sweet cackle of their innocent laughter or the often, impertinent questions they will come up with… in all seriousness is truly a pleasure.

I love kids in camp and the endless entertainment they offer. We recently had the pleasure of being privy to the antics of a sweet little cherub named Molly who would have been 4-5yrs old and who was camped with her extended family within ear reach. Her antics were endlessly entertaining for all and to some endlessly persistent. The adults managed Molly’s curiosities with wonderful variety, one Uncle had it all down pat, he thought, and would often suggest a game of ‘hide and seek’ to entertain the kidlets. This sent them off scrambling to find a suitable hideout while Unc’ continued with a measure of peace, for some time, in his game of cards.

Most of the older kids woke up to this ploy quiet early but little Molly was erstwhile. She had found the ideal hide in her Uncles open car and she waited patiently for her discovery. Some considerable time later Unc’ and the others realized they were still a kid short of their quota. Noticing this he, her favourite Uncle no less, decided he had better go a-lookin’. He found little Molly in the end, it wasn’t hard … but the little cherub had got so excited that her favoured Uncle was in the search for her now that she had managed to pee her pants! Unc’ was left to clean up the mess … and no doubt live with the reminder of his endeavours for a few days to come. Yep… there is a special angle that looks after kids in camp I often think.

Another campside tale we came across this trip was also equally entertaining… it was with a group of international travellers and he was recounting his own very recent experience of Aus’ in his trip to discover the taste in the test of ‘man vs wilderness’ something that is often hard to come by in Europe, where there is always a phone box, or a village, just over the next hill.

He had planned diligently, this his 4×4 experience of the Top End. They had flown into Darwin and were headed into Litchfield and then onto the Kimberley with the Gibb River Rd in sight, no less. He had been advised that he would need a 4×4, and a snorkel, particularly to cross the Reynolds River and others, which he understood had big greedy man-eating lizards in residence and he was duly impressed. He purchased his snorkel, one for him and one for the wife, in Europe and picked up his 4×4 in Darwin … he was ready. It wasn’t until he got to Litchfield and had spoken to one of the Rangers he had encountered that he was informed that the snorkel was for the car. He wasn’t expected to actually snorkel across the croc’ infested Reynolds River! Something his wife most certainly was a little loath to do, but had given into her hubby’s wishes. This had us in stitches and it reminded me of the many car related experiences we have had, some which I have mentioned in previous posts.

Cars are very much on The Mans mind of late, having just upgraded the forbie to a very serious man toy, he finds now that he is often asked “Not standard is it mate?” It makes him smile. The forbie now roars to life like a truck… but she settles (thank goodness) after a time. In the wilderness where the forbie is a must, something very much needed in the Top End development roads, you come across all manner of serious man toys. 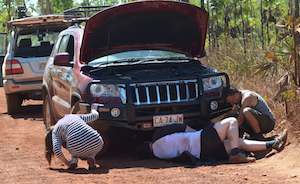 Stopping to help stranded tourists is also a courtesy you ignore at their peril, a peril which one day may be your own. The most common of problems we find are the bushes, with caravans and the like, and damage to the sump guard … for the ladies that is the metal sheet thingie under the car that protects the motor from stones, water and lots of things men run over, and through. Of course there are many things that can go wrong … and hire cars do not come with recovery gear or tool kits but that is another story. In fact it amazes us how few people travel without recovery gear or tools… Ya gotta love Aus’! Bush mechanics in the making.

Jan is an author and traveller who writes on Aboriginally themed novels about traditional Lore. Find out more about tribal Lore in her tales of “The Spirit Children”. Fictional stories of growing up when your world clashes with every day life. Tales of the Kadaitcha.