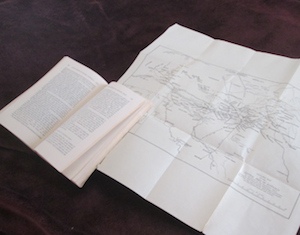 I’m on an adventure at the moment, a treasure hunt and I feel like a crusader in the Lost Ark from the Indiana Jones series. You see I found a treasure map, some years ago now. It was in the back of an old tome of Australian Lore and Legend from the Dreamtime. The study, later published a number of times was written over a hundred years ago by an anthropologist in his record of ancient Australian tribal custom and structure.

I found the book in the second hand lists and having an interest in the subject I was enthralled. For years I have revisited this book and many others, in structuring my novels about the Featherfoot, otherwise known as the Kadaitcha and it has been of great assistance. I like a touch of authenticity in my tales, a reach of the possible into the probable is something I enjoy. However now I am on a wonderful treasure hunt.

The map in the back is glued in… in many editions of this old tome it would now be missing but this one has the map intact. It shows the story lines, which were recorded by the anthropologists. It tells the story of the Inapertwa amongst many others. In some of these I am seeking the reality behind the legend. I have gathered Aus Aboriginal legends and information on Lore for many years and I have quite a collection. Most people find these tales nonsensical but to me they are rich in history and explanation. I see in them an oral history, enriched by legend and ripe in the art of story telling in such a way that it can be easily remembered and recounted.

Newly Released. The Spirit Children Series, those born of the Dreaming.

I’m not going to give away my treasure hunt… I don’t think even Indiana would have done that. Suffice to say that we are headed into the heart of the country, the Macdonnell Ranges. Those beautiful lands and country that sit nestled in around Alice Springs in central Australia. I am writing about this treasure currently in the tales of Kirri, a woman from the inlands who is on a quest of her own with the young Kadaitcha, Ariaka, in the third book of the Spirit Children series.

I need to touch the places she will venture in her quest, to give my readers a sense of reality and authenticity but it also is taking me on my own treasure hunt deep into the heart of Aus. You can read the beginnings of the story in ‘Lands Edge’, the first book of the series and the newly released ‘Through Other Eyes’. However back to the mystery of the Inapertwa.

Have you read how God created Adam and Eve? Well this is the Aussie version and the Creator in this tale, formed men and women from the Inapertwa creatures who emerged from the ancient seas. He carved from their ocean forms the fingers, hand, arms and legs of man and set them out across the land. It is an ancient legend from the Dreamtime.

Some of these Inapertwa had already taken the form of animals and plants but still the Creator used these forms to create man. This is how the Aboriginal tribes came to identify with their totems. The crocodile men and women for eg. were once the ancient croc’s who emerged from the seas and it was these Inapertwa that the creator used to fashion man amongst many others. Hence our ancient tribal Aboriginals identified with a totem that was the family of Dreamtime Inapertwa to which their spirits or shadows as they identified them, belonged. This totemic practice has changed over time, particularly since colonization of the land but identifying with a totemic form remains the same for many of the descendants of our First Nations people.

Spirits that travelled with them in this world. Knowledge is a great treasure and this ancient Lore is related to the stories and oral histories recorded in my old tome and its mystical map. I truly feel like Indiana Jones on a mystic quest for a truly special treasure.

You are welcome to travel with me. It is truly a magical world we live in.

Welcome along. You can join me on my journey in the ‘Follow’ button at the top of the page… come join me.

Jan is an Author and you can find out more about her books here under the tab ‘The Dreaming,’ for fiction tales of the Ancient Aboriginal Lore woven through contemporary times.
You can explore the Lore and Legends of ancient worlds in her stories.
The Spirit Children series, ‘Lands Edge’ Book 1, will take you into the heart of Sydney on an adventure into legend and time. ‘Through other Eyes’ Book 2, will take you deep into the histories of the Jenolan Caves. It has been newly released and is available now at Amazon.com

4 thoughts on “A Lost Ark – Finding the Inapertwa”