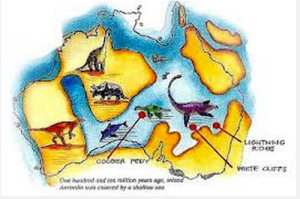 We crossed and ocean today, it was an inland sea once, very like the Mediterranean, but now this one is beneath the silted rock and beds of ancient sands, it is the Great Artesian Basin. We were travelling up through inland Queensland, commonly known as a region of the Outback. A region bordered by the Carnarvon Ranges (Katjarra Ranges) to the west, a plateau section of the Great Dividing Range with the Pacific Ocean to the east. This area is now a vast plain… a flat land.

That description of these inland ranges to the west is a misdemeanour really. The Carnarvon Ranges are a part of the great Dividing Ranges and they are more an escarpment edge to what one calls the plateau region of the central Queensland. We began exploring Mount Moffatt and the Carnarvon Ranges, many years ago. It is a wonderful region full of history and legend as well as rock art from this ancient landscape.

Looking at the landscape now here on the plains and taking in all its varied features is a revelation. We are told of rivers, mountains and plains when we learn about geology but rarely of altitude and the effects of a plateau or the drying of ancient seas. It isn’t as simple as plains with mountains running through the lands dividing them. If it was, then there would not be the almost treeless prairie plains of the US or the vast plateaus of the Oondirri Plains, otherwise known as the Nullabor.

However I love this country for all its rolling ancient plains and cutting escarpments and gorges in the distance. It is dry now and it is feared that we are entering another period of prolonged drought like the last decade bought through the central and coastal regions. It is truly a land of flooding rains and a sunburnt country.

It is in this region that the fossilized bones of ancient creatures have been discovered. Great monsters that swam the ancient oceans and now lay buried beneath the silts of these places. I have written about these in my publication ‘The Dinosaur Trail’, which is a travelogue of a wonderful trip we did discovering the evidence to be found of the dinosaurs throughout Northern Queensland.

As I pass through this landscape I am reminded of the wonderful jump-up at Winton where you can find the Australian Dinosaur Museum, which is an exceptional place to visit for young and old and one I am very much looking forward to rediscovering in the coming months. There has been a great deal of work done at the site and the discoveries continue.

To imagine this land as an ancient ocean when the sea levels were much higher is not hard. The silted soil and white clays that are now bands in the rock-faces exposed by road works would lay naturally beneath the waves in another time.

Now these clay bands are parched by the sun, though they were once gouged out, ground down and the fine ochres paint pots were used by ancient hands to tell stories and tales about ancient things. It is a skill that is practiced by few now and largely lost to the broader communities as with so many other ancient things from these lands. But there is a revival afoot and it is a good thing that. To touch base with your ancestors brings its own rewards.

In the fictional stories I write to be found in the Dreaming Series of books, I have tried to bring to life the world of ancient Lores, which do still exist in quiet places. It is a world that has a presence today, though one that is not commonly spoken of. A world that holds many secrets, as many as the land itself does… that over which we are driving.

The tales of the shaman speak of ancient things drawn from the writings and anthropological studies of many people, including my own experiences. There are four stories within the books of the Dreaming Series, each book is a story in the journey of life and each book contributes to the life story of Ariaka or Tom as he is commonly known. He is a young man who is growing into the Lore of the Kadaitcha or Featherfoot of his people, but who is also struggling to find his way in a modern world.

The traditional Australian Aboriginal tribes saw themselves as part of the scheme of the world around them. Their belief system was bedded in the spiritual things. They were a people who lived in the world of the spiritual, not of the physical. They once had no trappings of the modern world, no place in a world that was not part of the land that nurtured them. The Australian Aboriginal tribes were the only civilization and culture who never to invented the wheel as they had no use for it within the bounds of their world. No more so than the creatures which shared their world.

That they gave up this world for one more material in our time. A world introduced to their land by the convicts, colonists and settlers and it is no wonder at all. The new settlers to this land depleted the range of the native animals and impacted catastrophically on their cultural ways. Life in the material world had its compensations for the tribes also at times. Food was much easier to get when it is handed to you and more efficient medicines and cures enabled the Aboriginal populations to survive more easily. Like the rest of the world they slipped into a dependence on civilization and its trappings along with the mankind in general.

There were many advantages, but many also came at a cost and ancient man never dealt well with the vices civilization nurtured. These are vices that become the bane of so many civilizations and often become their nemesis.

You can discover something of this ancient world, explore an ancient outlook, one that exists in a modern world within the pages of fiction, so come journey with me as I tell you a story of the Dreamtime. The books are available in paperback and ebook at Amazon and at Smashwords, in many different formats. You can also check out the discounts available for the paperbacks at my web site, which will offset postage costs. I hope you enjoy the tales.

The new series of ‘The Spirit Children’ was launched this month. It is a smaller series of books, more affordable and mobile. Book 1 – Lands Edge is available now with its companion, Book 2 – Through Other Eyes, entering its editing stage and expected to be available by the end of October this year. This book, Through Other Eyes, is available for pre-order and will be automatically delivered if pre-purchased, by then under the nifty pre-order system Amazon has built.

The first two books are set primarily in and around Sydney. They are an adventure into the spiritual lands hidden deep within the city. ‘Through Other Eyes’ will introduce you to the mysteries of the secrets of the Djaranin, the Dogs of Death and draw you through the beautiful mysteries of the Jenolan Caves. These are stories like none other you will have ever read, they are a view into a world rarely spoken of.

I hope you enjoy the journey into tales of the ancient Australian Lore, visiting a world that is so very different yet strangely familiar.